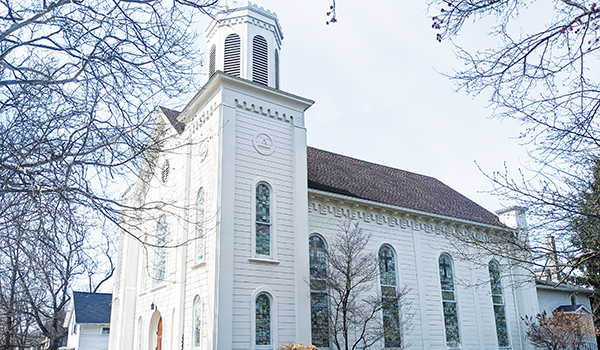 Families across the village begin making their way to First Universalist Church of Dowagiac for Sunday service. On their way to their seats, church members would have walked past and struck up conversation with fellow church members and prominent local figures including village president Justus Gage, Round Oak Stove Company founder P.D. Beckwith, Heddon Company founder James Heddon and more.

The oldest public building in the city, the church currently known as St. Paul’s Episcopal Church, 306 Courtland St., Dowagiac, has withstood the test of time and continues to serve its Dowagiac community more than 160 years later.

“This church was founded by a who’s who of Dowagiac history,” said Dowagiac Area History Museum Director Steve Arseneau. “We’re looking at a building built when Dowagiac was just 11 years old. It has seen both the growth and stabilization of Dowagiac. It has seen all of Dowagiac’s history.”

A Universalist pastor, Gage raised $3,000 to build a church in 1859. According to Arseneau, at the time of completion, it was the town’s only auditorium. Black civil rights supporter Sojourner Truth and women’s rights advocate Susan B. Anthony were among the many famous individuals who used the church as a platform to spread their messages.

“Dowagiac was a young village of about 1,000 people,” Arseneau said. “It grew slowly over the course of the next few decades. The church served as the meeting hall and entertainment venue of the city. It is where everyone would have gathered.”

The Universalist Society in Dowagiac deteriorated following Gage’s passing in 1875 and the Universalist church closed its doors in 1884. According to Arseneau, Beckwith — the mayor at the time — bought the building for $650 and offered free use of the building to religious organizations.

In 1911, a group of Episcopalians signed a five-year lease with the Universalists still occupying the church, paying them $100 a year to use the building for their own worship services. Two years later, the members purchased outright, and on June 8, 1915, St. Paul’s was officially established as a parish of the Diocese of Western Michigan.

St. Paul’s church has a special place in Richard Judd’s heart. A lifelong member of the church, Judd remembers going to church with his sister every Sunday as youths and eventually convincing his parents to become churchgoers themselves.

“I like the long tradition, the continuity and you know,” he said. “I’m not living in the past, I’m still looking ahead but there’s a certain continuity here that is firm. Something that I can count on. We all need our anchors in life and this was always an anchor in mine.”

Judd’s connections to the building go back several decades before his birth. His great grandfather, Mark Judd, founded Judd Lumber Company in April 1859, as a water-powered planing mill.

With Mark Judd’s ties to Universalist Society and the fact that the company was founded prior to the construction of the church, it is possible — if not likely — that the church was constructed using wood from the Judd lumber mill.

The inside of the church has undergone several remodels and even survived a fire in 1958. Even so, much of the structure stands just as it did in 1859.

These days, the church is doing its best to serve the community while staying afloat. The parish hosts a food pantry that is utilized by the community and also provides a place for self-help groups to meet weekly. It has also lost several members over the years, either through death or relocation.

According to Judd, the Thomas Dalton family and St. Denys Foundation have been generous supporters and have helped ease the church’s financial burden.

“Due to shrinking membership in our congregation, we began to use supply priests as we are unable to support a full-time rector,” Judd said. “Our financial reserves are running low and we may no longer be able to survive as an independent parish entity.”

While the future of the church is uncertain, Judd is confident the building would continue to be utilized as a pantry and gathering space for community members.

“This place means a lot to a lot of people,” he said. “It’s an important part of our community and we hope we can continue to serve the community for years to come.”

DOWAGIAC — Putting together a high school yearbook is a long process for schools around the country. From helping students... read more