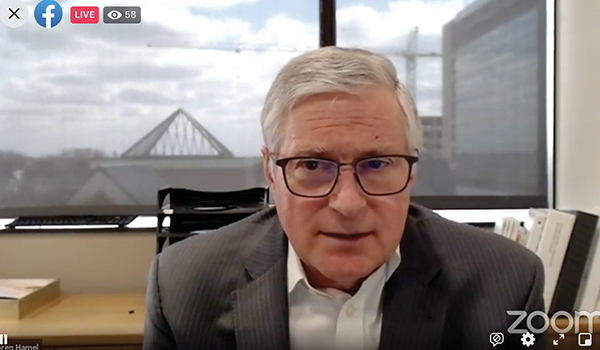 Loren Hamel, president of Spectrum Health Lakeland, gave stern warnings on Wednesday about COVID-19 case trends in Berrien County. He said younger people were being hospitalized more than before in the pandemic. (Leader photo/CHRISTINA CLARK)

BERRIEN COUNTY – COVID-19 cases are steadily increasing across Michigan and in Berrien County, according to health officials from Spectrum Health Lakeland and the Berrien County Health Department.

“We are seeing right now about 48 new cases per day on average, and that has been fairly steadily increasing for about the last three weeks or so,” Britten said. “Our percent positivity in tests in the county is around 10 percent. Around a month ago, we were sitting below 5 percent. Below 5 percent is a good place to be, 10 percent not so much.”

She went on to say that there was an increase in younger adults and children becoming infected with the virus. She said particularly COVID-19 cases with middle and high school students were rising.

“It’s a little bit difficult to compare age trends and breakdowns right now compared to where we were at in the fall, however. The vaccine makes a difference in how this all plays out,” Britten said. “It’s possible what we are seeing is the absence of hundreds of hundreds and hundreds of cases amongst older adults who are out there and are very well protected as they are getting the vaccine.”

COVID-19 variant strains also have played a factor in the shifting of the data, Britten said. There had been 12 confirmed cases of the so-called “U.K. variant” of the virus, with eight cases considered suspect of the variant.

Hamel said there had been a few days where there were no patients admitted to the hospital with COVID-19, up to 27 admissions. He said on Wednesday, Spectrum Health Lakeland had fewer than 27 admissions of COVID-19 for the day, but cautioned that it being only 2:30 p.m., there was time for more.

“In the Spectrum hospitals, we are seeing a younger cohort be admitted. We have, within our facilities overall, admitted children,” Hamel said. “We have folks less than 30 years old on ventilators in the [intensive care unit]. We have more patients in their 40s and 50s than we had before. The average age of individuals admitted is about 10 years younger.”

Hamel attributed that to the success of vaccines and vaccine distribution to the older population in the Berrien County area.

Hamel encouraged residents to continue to get tested for COVID-19 if they begin coming down with symptoms or know they have been exposed. He noted fear of having to cancel an upcoming trip or not wanting to quarantine as excuses he had heard for not get tested.

“Please, that is not a responsible way to treat potential infection,” Hamel said. “This is still taking lives in our community. When you give that disease away, somebody else could get it and die from it.”

Both Hamel and Britten encouraged continued vaccination of residents in the county. Both urged residents to check the BCHD website, the SHL website as well as other providers like Meijer and CVS for vaccination appointments. Michigan now has vaccinations open to all residents 16 years of age and older. Only the Pfizer vaccine is approved for 16- and 17-year-olds.

“The race [against variants] is to get antibodies into as many people as quickly as we can, so the virus has fewer chances to mutate and fewer chances to kill our friends and neighbors,” Hamel said. “In this country we are now up around 560,000 deaths in a year. That’s more lives lost than in World War I, World War II and Vietnam. [It is] Ten years’ worth of battle.”

With spring break arriving for many students and family in the community, Britten said the Centers for Disease Control and Prevention were not recommending travel at this time.

“We are the point in our state, but also as a country, where we are seeing this rise in cases,” Britten said. “We don’t know if this is going to level off.”

She noted that travel can increase the risk of becoming infected with COVID-19, as well as spreading it. Some precautions to take prior to travel were to try to be fully vaccinated before a trip.

“Getting a COVID-19 test one to three days before you travel is helpful,” she said. “But just because you have a negative test doesn’t mean you can’t get infected thereafter.”

She noted that road trips had become a popular alternative to flying in an airplane.

“[People] feel like there’s more control over their environment. They can at least be in a vehicle with people only from their household,” she said.

Avoiding destinations with high population densities, and large gatherings, even in states that allow it, were other pointers Britten gave.

“It is not advisable to be around large groups at this point in time,” she said.

NILES – After being open for a year, Spero House in Niles is looking to grow its wingspan. The nonprofit... read more