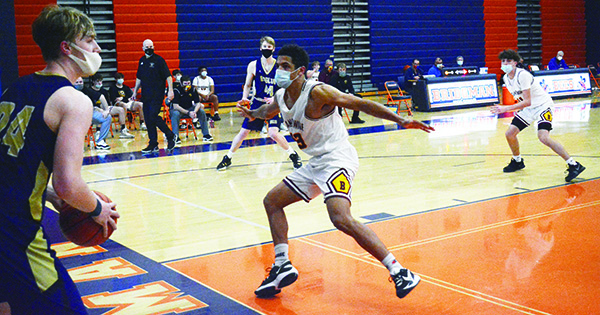 The Eagles jumped out to a 20-6 lead and best Bobcats 56-38 Saturday at Bridgman High School.

“We had a slow start,” said Brandywine coach Nathan Knapp. “We couldn’t hit anything tonight. As a coach, we prepared for their bigs all season long. They’re a little bit quicker than what we thought and that 2-3 zone and their quickness got to us and frustrated us. It was just one of those nights that you don’t want, but the kids never gave up.”

Schoolcraft’s size and zone defense were hard for Brandywine to crack, with the Bobcats unable to get much traction offensively inside the post. To make matters worse, Brandywine was not able to get outside shots to fall. Tyler Deminy’s 3-pointer in the closing moments was the team’s lone make of the game.

The Eagles led 28-11 at halftime and 40-22 after three quarters. The Bobcats used a 9-2 run to start the fourth to trim the deficit to 11, but were unable to get any closer.

“We just never got over that hump,” Knapp said. “We turned them over at times and we did good things, but we just couldn’t capitalize. Hats off to them, they’re a great team. You want your kids to win and come out on top. They gave everything they had tonight. A few buckets here and there could have made it a different outcome, but it is what it is.”

Schoolcraft led by as many as 23 points in the fourth. Tyler DeGroote led the Eagles with 27 points and Ryske and Asher Puhalski scored 12 and nine points, respectively.

The Bobcats were led in scoring by a trio of seniors. Caleb Byrd scored 11 points, while Kendall Chrismon and Gabe Gouin scored eight, respectively.

“Our seniors have been everything,” Knapp said. “As little kids growing up in the midget league program, you see them out there working and then you come out here and see Caleb and Gabe give 100 percent. Kendall came to us from Niles as a sophomore, and he’s done a heckuva job coming around. Jacob Fox got the short end of the stick this year with the ACL injury, and you have Bryce Taberski, too. All five are just hard workers who set great examples for the underclassmen so they’ll know what to do.”

The Bobcats season ends with a 10-3 record. While the Bobcats wanted to survive and advance, Knapp was proud of his team’s effort down to the final buzzer.

“It’s heartbreaking,” he said. “But there’s always tomorrow. I told the kids that this loss is just another lesson, both in basketball and life. You take the pain, ride it out and get that fire in your belly. Let this be motivation for you because nobody likes defeat.”