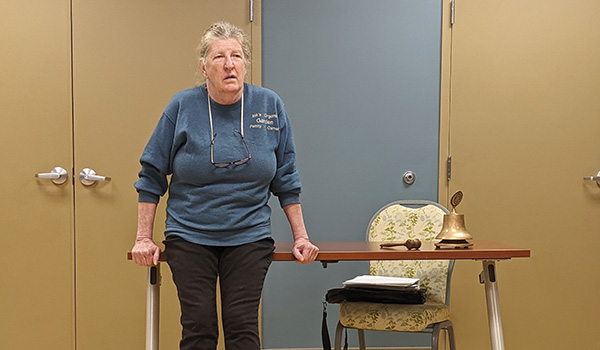 DOWAGIAC — Members of the Dowagiac Rotary Club were treated to a lesson in agriculture Thursday during their weekly meeting.

Penny Murphy, co-owner and operator of Ma’s Organic Garden, 476 N. Benton Center Road Benton Harbor, was on hand to talk about her experience growing and cultivating organic plants and
vegetables.

The small organic farm was founded 15 years ago by Murphy, George Swerbinski and Ed Aho and has received notoriety after being awarded a $12,000 grant in 2008 from the Frontera Farmer Foundation, an organization started by famous chef Rick Bayless to assist small to midsize farms.

Murphy said the farm has grown vegetables including organic heirloom tomatoes, corn, beans, winter and summer squash, sweet potatoes, both early and late pickles, garlic, wax beans, greens and eggplants, which they sell at a covered stand next to an old, red barn.

“I have a 200-year old barn that is hand-pegged,” Murphy said. “The oak beams are as solid as a rock. We also have one of the first automatic seeding machines in Benton Harbor. It’s horse-drawn and still in really good shape.”

A lifelong farmer, Murphy bought her current home in Benton Harbor 22 years ago and thought the one acre section of land beside her barn would be a great location for her farm. The problem was that the soil was in terrible condition.

“The dirt was so dead that it would only grow moss,” Murphy said. “Before we could grow anything, we spent several years rebuilding the dirt. Our first crop there was sorghum, a great crop for enriching soil.”

Ma’s Organic Garden utilizes manure, lime and bone meal as organic fertilizer. While the farm does use pesticides, the pesticides it uses are certified organic and not Miracle Gro.

“Neem oil is a good one,” she said. “It’s a pesticide, fungicide and mitosis all at once. Organic fertilizers are not made with chemicals and oil. You can tell what kind of fertilizer a farm is using based on the smell. If they’ve been using Miracle Gro or something similar, you will be able to smell the oil and petroleum. It’s pretty rank.”

The farm has a roadside stand with vegetables available for sale and a Facebook page featuring produce updates and hours of operation. According to Murphy, bringing organisms to life from seed to feed is the most rewarding aspect of what she does.

“You have these little dead things in your hand, and you put those dead things in the ground for them to grow and produce,” she said. “They produce beautiful fruit and beautiful vegetables that you can share or give away. Watching people who are ill stop by and get food from us that isn’t going to make them sicker is a miracle. I’ve never not known gardening; I’ve got dirt in my blood. When you grow up that way, you can’t not do it.”