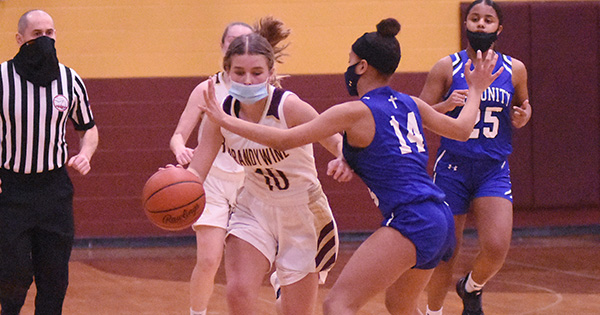 HARTFORD — Despite missing four of its top six players due to injury or COVID-19 issues, the Brandywine girls basketball team rolled into the Division 3 District championship game with a 51-39 win over Bridgman Wednesday night.

Freshman Ellie Knapp, who was the area’s top scorer this season, got the Bobcats (10-2) off to a good start with nine of her game-high 21 points in the opening quarter. Brandywine led 11-4 after one quarter and never looked back as it opened up a 25-12 halftime advantage.

Knapp added six assists on the night for the Bobcats, who got eight points and 14 rebounds from Haley Scott and five points and nine rebounds from Kallie Solloway. Courtney Bates finished with nine points.

Brandywine will face host Hartford at 6 p.m. Friday for the championship.

The Bucks (12-0) jumped out to a 19-5 first-quarter lead on Lakeshore at Benton Harbor High School and cruised home with a 56-34 victory.

Buchanan held Lakeshore to nine first quarter points. The Bucks led 34-9 at the break and 44-22 heading into the final quarter.

Faith Carson scored a game-high 19 points, to go along with nine rebounds and eight blocks, to lead Buchanan, which also got 13 points, three rebounds and two steals from LaBria Austin.

The Bucks will more than likely have to play the remainder of the season without starter Claire Lietz, who suffered a knee injury in practice Tuesday.