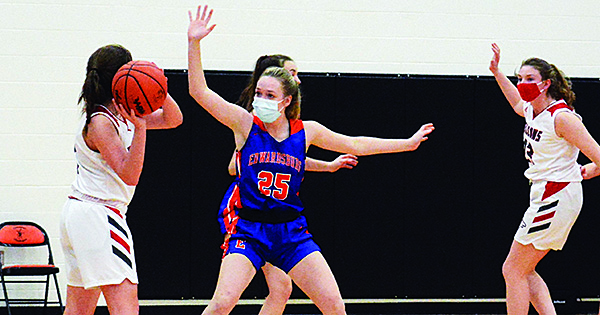 “I think we did a great job of controlling the tempo,” said Edwardsburg coach Jon Pobuda. “We knew that they like to pressure up, and they like to get up and down the court, and I think we were able to beat them at that tonight. If they wanted to run, we wanted to get out and run and just beat them up and down the court. I thought our girls did a nice job of that tonight; they were unselfish. If we clean up some things like layups and free throws, we’re gonna be really tough to stop.”

The Eddies jumped out to an 11-1 run in the first quarter and never looked back, using an aggressive defense to force turnovers that led to easy baskets on the other end. Edwardsburg led the Falcons 39-20 at halftime, with Macey Laubach scoring 17 of her game-high 19 points in the half.

“On film, we saw that they play a lot of man-to-man,” Laubach said. “Coach told us to look for them to overplay and, when we get the opportunity, to go backdoor and beat them to the basket, and it worked.”

“I think teams don’t realize how athletic she is,” Pobuda said.  “She can get to the basket and she can shoot from the outside when she’s on. If she stays focused, she can do that every night for us.”

The Falcons were able to whittle the deficit to 12 late in the third quarter, but the Eddies closed the game on a 20-5 run to win by 27.

Leah Dumm led all scorers with 20 points for the Falcons, and Riley Smith added 10.

“Katie did a nice job controlling the tempo of the game,” Pobuda said. “Pushing the ball and slowing things down when we need to attack or when we need a basket. Ella Castelucci, out front in the press, got her hands on a lot of balls and caused problems for the other team. Averie, Paige, and all of our girls played well tonight.”

The win sets up another showdown with Three Rivers (12-2) at 6 p.m. Friday for the district title. The Eddies lost to the Wildcats 50-39 in a March 1 matchup and were swept last year. Edwardsburg is hoping to turn the tables this year.

“We have to be physical,” Pobuda said. “We have to keep them off the boards, finish at the basket and knock down our free throws. This is a match-up we’ve been looking forward to. It seems like every year at this time, this game it’s one of us. The last five years it has been us and Three Rivers in the championship game. I like the way we’re playing; we’re doing some good things.”

NILES — When the Niles girls basketball team faced off against Three Rivers on March 5, the end result was... read more