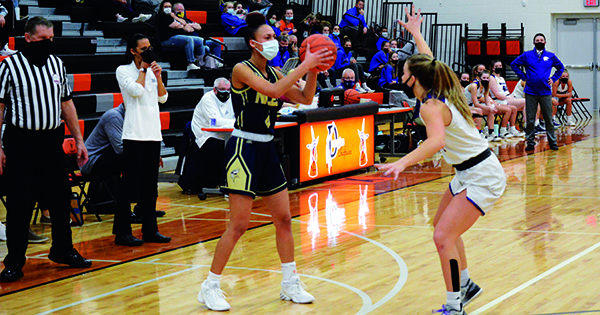 Niles’ Amara Palmer looks for a teammate to get the ball to during the Division 2 District semifinals Wednesday. (Leader photo/MAXWELL HARDEN)

NILES — When the Niles girls basketball team faced off against Three Rivers on March 5, the end result was a 30-point loss.

The Vikings came close to evening the score against the Wednesday night, battling back from a 10-point halftime deficit to force overtime before coming up short 60-56 in Division 2 district semifinal play at Dowagiac High School.

“This team has fought all season,” said Niles coach Jessica Johnson. “They’re built to keep working hard and don’t give up. I love coaching this team because they give their all and leave it all on the court. They easily could’ve folded, but they didn’t, so I’m very proud of them for that.”

The Wildcats got off to a good start, outscoring Niles 18-6 in the first quarter before taking a 30-20 lead into halftime. But the Vikings flipped the script by using defense to fuel their offense. The Vikings outscored the Wildcats 19-8 in the third quarter to take a 39-38 lead to start the fourth quarter.

“Our strength is our defense,” Johnson said. “Getting into lanes and playing angles has worked for us all season and [is] what we leaned on.”

Niles continued the momentum into the fourth quarter, with a Kamryn Patterson 3-pointer capping a 9-2 run to give the Vikings a 48-40 lead. The Wildcats responded using an 11-1 to take a 51-49 lead late before an Amara Palmer basket with just over one minute remaining ended up sending the game into overtime.

In overtime, the Vikings were unable to convert open looks, making just one field goal in the frame. Three Rivers’ Alivia Knapp was the difference-maker, scoring seven of the team’s nine points to hold off the Vikings.

“We tried to keep the same mentality as we would in a close, fourth-quarter game,” Johnson said. “We tried to focus on defense and make the easy buckets, but we struggled with that in overtime. The girls were tired.”

While the loss will sting for some time, Johnson is proud of what her team has accomplished this season as well as what it has overcome.

“Following regulations and not knowing what team we’re going to have each day was tough,” Johnson said. “But the girls have been powering through the entire time. They don’t complain about anything.”

NILES – At around 11:30 a.m. on Thursday, texts from the Niles city alert system went out to users that... read more