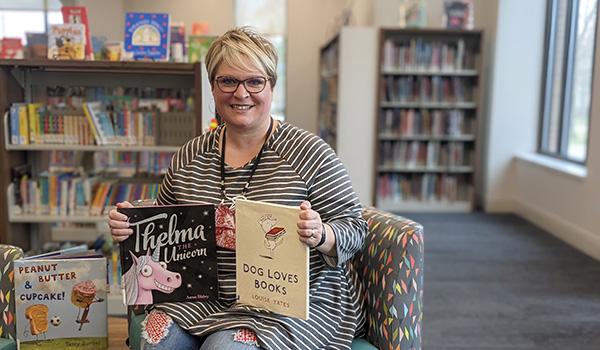 DOWAGIAC — A local librarian is teaming up with members of the community to encourage children to read.

The Dowagiac District Library’s Community Helpers Storytime program continues to grow in popularity each and every week under Youth Services Coordinator Melissa Phillips.

The program features one prominent community member per week recording themselves reading a children’s book aloud. The video is then sent to Phillips for editing and then posted to the library’s Facebook page.

Storytime had been an in-person affair prior to the COVID-19 pandemic. Children and their families would gather around inside the library and Phillips would read one short children’s story per week. Due to capacity restrictions brought on by the ongoing pandemic, Phillips, who oversees storytime at the library, had to transition the program to Zoom. By Christmas, Phillips said attendance dwindled to the point where the library would have had to consider postponing storytime altogether.

After thinking of ways to boost interest in the program, she found inspiration from an unlikely source: Leader Publications’ Horizons magazine.

“A sales rep asked if we wanted to put an ad in the magazine for the new library,” she said. “They were going with the theme ‘putting the unity in community,’ and I liked that. This world is so divisive, so it’s like how can we come together? I thought about how I could do that in my role as the children’s librarian.”

That is when she came up with the idea of asking prominent community leaders to film themselves reading short children’s books aloud.

“Every library has lines of books about community helpers,” she said. “Let’s read about the farmer. Let’s read about the post office worker, and let’s read about the reporter. I didn’t know if people would do it because people get camera shy but wondered if I went out to the people in the community and started with some downtown familiar faces because this is for kids and see if they’d be willing to read the story instead of me.”

One of the program’s first participants was Jordan Anderson, owner of The Baker’s Rhapsody, 144 S. Front St. Phillips gave Anderson a list of books to choose from, with the selection of books tailored to the participant’s profession or interests.

“Melissa is a regular here at the bakery,” Anderson said. “She came in one time, and she asked if participating was something I’d like to do and I said absolutely. It was a lot of fun for sure.”

“I picked Jordan because I know all the kids, especially my storytime kids,” Phillips said. “I know it’s not just my storytime kids it’s others, too. But they would come here for storytime when in real normal times and then say like, ‘oh we’re going to the bakery afterward to get a hot chocolate and a cookie,’ so seeing someone they know read a story to them like Jordan helps.”

A theater performer in college, being able to flex his creative muscles with voice acting was a fun experience for Anderson.

“The bakery is always a family-oriented place,” Anderson said. “It’s always great when you can do some outreach stuff with the community and especially right now with the social distancing for COVID and stuff like that. These readings over the internet that they’ve been doing are just really, really fun.”

According to Anderson, the videos are well-received with children far and wide.

Phillips has been happy with the feedback she has received and plans to continue offering the program going forward, even when the pandemic ends.

“The children enjoy the program,” she said. “Not only that, but the project doesn’t take much work on my end. It’s a zero-cost program that we’ll continue as long as we can.”

DOWAGIAC — One of the Dowagiac community’s most time-honored traditions, the Miss Dowagiac Scholarship Pageant, will not take place this... read more