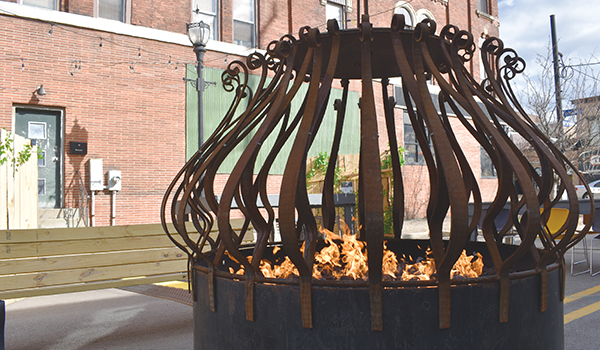 After Monday evening’s five to two vote by the Niles City Council to keep The NODE, the Niles Outdoor Dining Experience, located just inside Second Street from Main Street in downtown Niles, city officials are still digesting some of the feedback received. Council members John DiCostanzo and Georgia Boggs voted “no” on The NODE, with Amanda Dunnem absent from the meeting. 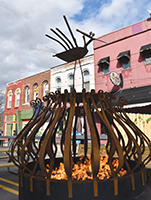 The vote extended The NODE’s installation at its current location for at least another 12 months. It originally debuted in late December in response to continued limitations and mandates impacting local restaurants and bars.

Mayor Nick Shelton said the discourse and comments period reminded him of when the city decided to opt-in for marijuana businesses, and before his time as mayor, the proposed single hauler trash ordinance in October 2016, which saw around 200 people showing up to the city council meeting to make their voices heard.

“Something I’ve been thinking a lot about lately is if everyone agrees all the time, we aren’t taking a deep enough look at the decisions we are making,” Shelton said. “With this, we heard from so many people about this – from citizens, property owners, businesses. We had so much feedback, and it didn’t all agree. It allowed us to make an even more informed decision when the time came to vote.”

Shelton said he hoped the vote would now bring those passionately for and against The NODE together to create the ideal situation for everyone.

“I am hopeful that everybody will begin to point their energies in the same direction to do everything they can to implement this in the best way possible,” Shelton said. “We have 12 months to test it out. I believe in my heart if we all work together, it will make Niles a destination.”

Bill Lakeman, owner of Four Flags Antique Mall, located just outside of The NODE’s blocked off area at 218 N. Second St., said during the meeting that traffic passing a business is one of the determining factors of value in a retail building.

“The NODE has successfully taken that to virtually zero,” Lakeman said.

Lakeman is one of 28 names on a petition submitted to the city council that asked council members to consider relocating The NODE.

“We are requesting that The NODE be removed from Second Street and placed in an area with growth potential and opportunity that will not interfere with livelihoods of current businesses,” the petition said.

Another business owner in the area, Matt Mazingo, owner of Trap House 24 SLR gym at 127 E. Main St., which directly faces The NODE on the corner at Second Street, expressed concerns over who would be responsible if something happened in the area. He said he had cameras put up at his business to watch The NODE, and said many of the people at The NODE seemed to be the same group of 10 to 15 individuals.

“We had the opportunity to put a gym anywhere. We put it on Second Street, and now you take away all of our drive-by traffic so people can come out and drink,” Mazingo said. “I understand the pandemic and COVID-19 has taken the fun away from everything in the past year, but you have to also look at business owners and people who have invested millions of dollars downtown.”

“The fire pit that is down there is functioning like a public bar, which I don’t think is bringing the demographic down there that the city is hoping to get,” Thibault said.

Still, others spoke positively of The NODE’s impact on business and the downtown atmosphere.

Owner of Jim’s Smokin’ Café, 220 E. Main St., Niles, said he has seen an increase in new customers to his business.
“We have seen a pretty good increase in traffic and everyone that we have spoken to, I try to talk to everyone who comes In the restaurant, has been really positive about The NODE especially people from outside our immediate area,” Morris said. “I’ve had people coming from Three Oaks, Stevensville, St. Joseph, Grand Rapids and Indiana, and they just can’t believe how cool it is.”

Morris said he had seen businesses, like Pizza Transit, 215 E. Main St., create offerings specifically for The NODE like s’mores kits to use at the fire pit.

“I’ve been in talks with the Downtown Development Authority, and they have something in place as to the look of The NODE,” Townsley said, addressing concerns about its appearance. “I am also trying to utilize [The NODE] as a tool to spread awareness of my business. One of the things we just did was the yoga and mimosas event that happened on Saturday. We partnered with Wrapped in Light. They did a yoga session at The NODE, and then came to the brewery for mimosas afterward. Everybody had a good time, and it’s something we would like to do in the future.”

Townsley also said he was a part of the volunteer committee that checks The NODE each night of the week to ensure any trash is cleaned up.

A comment submitted from Peter Colovos, trustee from Hagar Township, was read at the meeting by Shelton.

“From the perspective of generating business and attracting visitors to Niles, the NODE has gotten our north county attention and others outside of Berrien County. This concept alone has enticed us to come to Niles and visit,” Colovos said, “The effect of the NODE has increased awareness and the image of downtown Niles. If it matters, others not embroiled in the local controversies look at The NODE and Niles as progressive and is viewed in a positive light.”

The President and Chief Executive Officer of the Southwest Michigan Regional Chamber Arthur Havlicek expressed his support of The NODE as well.

“These businesses were reeling from shut downs and restrictions. Niles’ leadership stepped up to find an out of the box way to support them. That leadership should really be commended whenever, wherever and however it occurs,” Havlicek said. “If you don’t hear that commendation enough, let me assure you I do. Many of the communities and businesses we represent have referred to Niles as ‘trailblazers’ because of what they have done with The NODE. In addition to the local recognition, statewide publicity you’ve received will pay long term dividends for Niles beyond just the direct benefit to businesses.”

The implementation of The NODE was quick, said Lisa Croteau, director of marketing and administration with the Niles DDA.

Second Street is currently blocked off with orange jersey barriers. In its earliest installation, picnic tables and plain fence wind-breaks were features, as well as an open gas firepit. Some Improvements have been made, including a grate over the firepit, seating options and artwork.

“This is a work in progress,” Croteau said. “You need to prove what you are presenting has value in order to have someone to make an investment.”

The experience and overall execution of The NODE will be improved by the ability to now seek funding, Croteau said.
“It’s not just restaurants hurting, it’s all small businesses,” she said. “To be able to make an attempt to create a space to bring more people downtown, that’s more potential customers that every business can benefit from.”

Croteau said on Tuesday she had already met with at least one family interested in investing monthly into the space to keep it installed and improve its look.