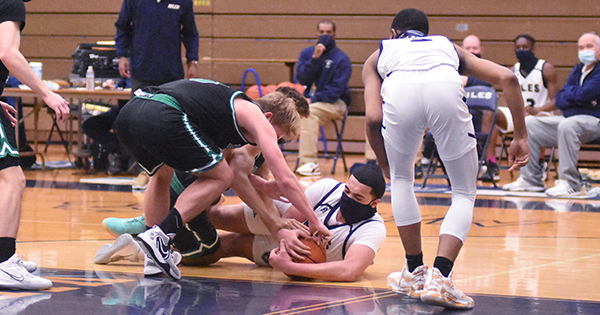 NILES — It has been a tough season and even a tougher couple of weeks for the Niles boys basketball team.

The Vikings struggled through a 2-13 regular season. As if that was not enough, Vikings Head Coach Patrick Touhey was suspended for an undisclosed altercation with a varsity player. Assistant Coach Myles Busby coached Niles the final two games of the regular season and again Monday night in the Division 2 District opener after Touhey resigned Sunday night.

The Vikings shook off a slow start, trailing Berrien Springs 21-9 after one quarter to pull out a 57-55 victory over the Shamrocks.

Niles advances to the district semifinals on Wednesday, where it will face former SMAC rival Lakeshore. Tipoff is set for 5 p.m.

In the second game of the doubleheader Monday night, Buchanan ran past a short-handed Dowagiac squad 71-45 to advance to the semifinals, where it will match up against Edwardsburg at approximately 7 p.m.

It took the Vikings nearly the entire contest to crawl out of the early deficit. Niles showed poise and heart as it overcame a 13-point deficit in the final six minutes to put out the victory.

Senior Mike Gilcrese, who has moved to handling the basketball for the Vikings due to depth issues at the guard position, scored the game-winning point with 2.2 second remaining. Busby said that the Vikings wanted the ball in the senior’s hands for the last shot.

“Coach [Denny] Parks is our offensive guru,” Busby said. “He drew that up in the timeout for Mike, who has been playing exceptional basketball for us of late. He’s been doing a good job without the ball to make plays for others. He did that tonight. We’ve asked Mike to handle the ball the last couple of games. We liked his matchup.”

Berrien Springs (5-10) had one last desperation heave from Ashton Sheline, but the ball never came close to going in.

After falling behind in the opening quarter, the Vikings outscored the Shamrocks 11-5 in the second quarter to cut the lead to 26-20 at halftime. Berrien Springs took an eight point (44-36) lead into the final eight minutes, which it increased to 52-39 before the Vikings mounted their comeback.

“We talked before the game to believe in themselves,” Busby said. “We told them that ‘No matter what the situation is, as long you fight, you have a chance.’ And they gave themselves a chance to win because they continued to fight.”

Austin Bradley led the Vikings with a game-high 15 points, while Zach Stokes added 10 points. Casey Marlin and Gilcrese both finished with eight.

Buchanan took advantage of Dowagiac’s lack of depth to earn its first-round victory.

The Chieftains dressed just seven players due to COVID-19 and injuries. That left the Chieftains struggling to keep up the pace that the Bucks set, as well as no way to try and keep 6-9 Buchanan center Logan Carson from scoring and will.

Dowagiac (3-12) got off to a good start, leading 7-4, but the Bucks gathered themselves and quickly took charge of the contest. A 7-2 run to end the opening quarter gave Buchanan an 18-13 lead, which the Chieftains would never challenge.

“I was happy with my kids and the energy they played with,” Buchanan Coach Reid McBeth said. “Our team runs through our big guys (Carson and Fazi), but we get a lot of help from the perimeter guys as well. But our bread-and-butter is down low.”

Carson would finish with a game-high 21 points, while Fazi added 14.

The Bucks wore down the Chieftains in the final 16 minutes of the game. Buchanan’s biggest lead was 34 points.

“We had seven guys, and we have been struggling with guys for the past several weeks,” said Dowagiac Coach Danum Hunt. “It has even been tough to practice. You can’t practice when you only have five or six or seven guys. But they played through it. It is hard to prepare for tournament time. They just wore us down.”