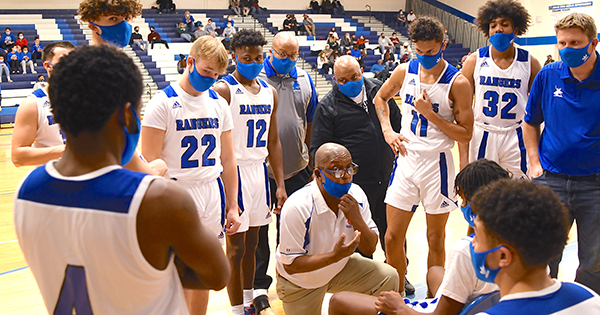 After 11 years, Ricky Evans has stepped down as the Cassopolis boys basketball coach. (Leader photo/KELLY SWEENEY)

His resignation came on the day when Cassopolis Athletic Director Chad Gardner announced the Rangers would not make a run at another district championship after having to go into quarantine.

“It was just time,” Evans said Monday night. “I have been thinking about it. It has been 11 years. A lot of things change.”

Evans added that he wants to enjoy watching his granddaughter play sports and to spend more time with his wife and family.

Cassopolis played Mendon last Thursday, which then had a player test positive for COVID-19. Under state guidelines, the Ranger program was also put into quarantine, thus ending its 2020-21 season a day before the boys’ basketball tournament.

It was the second straight year the Rangers were kept from defending their district championship. Cassopolis, which went 24-2, reached the Division 3 state quarterfinals in 2019 before being eliminated by Pewamo-Westphalia 70-50.

The Rangers were in a position to defend their district title for the fourth straight season before the Michigan High School Athletic Association suspended and then eventually ended the 2019-20 winter sports season.

Cassopolis was set to play long-time rival Brandywine in the district championship team. The Rangers had won the previous three district titles from 2016-17 to 2018-19.

“It is sad to see someone like coach Evans leave,” Gardner said. “He is very well respected and has done so many good things for his players and school. Coach Evans will always be Ranger Strong.”

Evans, whose team won yet another Southwest 10 Conference title this past season, said he hopes the next coach can pick up where he left off.