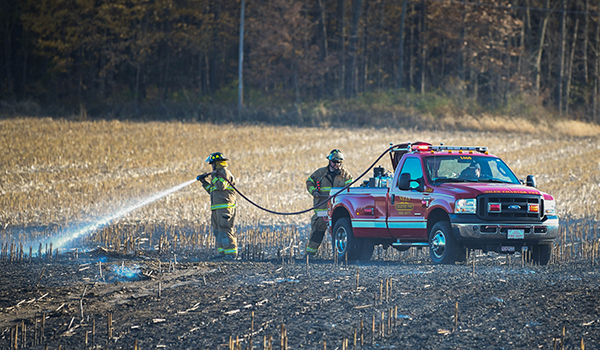 SOUTHWEST MICHIGAN – Fire departments across the Berrien and Cass counties were busy over the past weekend responding to regular calls as well as grass and field fires.

Now, with spring weather on the way, department leaders are urging residents to use caution when burning brush on their properties.

The Dowagiac Fire Department responded to at least three calls for grass fires over the past weekend, according to Deputy Chief Robert Smith.

“Cass County, as a whole, was very busy with numerous field and grass fires,” Smith said. “It was dry. It was windy. Things were getting away from people who were legitimately just trying to clean up their yard. It just wasn’t a good weekend to be burning.”

Smith said he has seen many area departments urging residents on social media to be careful.

On the “Howard Firefighters” Facebook page, administrators of the page have posted updates from the National Weather Service on wind and precipitation that may impact burn permits issued prior to the weather changes including higher wind speeds.

According to Buchanan Township Fire Department Chief Tim Jesswein, there were about 11 grass or field fires the prior weekend in the greater area.

“It’s a combination of the dry weather and the wind,” Rainwater said. “We are inch and a half shy of the normal conditions of rainfall, and we are getting those southerly winds which are a nice warm, dry air. People are just underestimating the ability of the wind to carry a small fire and make it a large one very rapidly.”

Howard Township Fire Chief Chris Corzine said it is not unusual to have grass fires this time of year, but that the number of them this year kept departments throughout Berrien and Cass counties out “nonstop” responding to calls.
Corzine said one of the fires was simply a burn on open ground that the wind caught and carried the flames.

“That’s typically what has been happening,” Corzine said. “[Residents] are not respecting the wind and the dryness. It takes one gust of wind, and it’s out of control. They’re all starting out as burning on their own like normal. The wind wasn’t really expected.”

Jesswein said with the snow melted and gone, everything is still dry from the fall and winter.

“It makes it crisp and easy to burn,” Jesswein said. “People go out and burn trash barrels in the country. The sparks come off of that and catch the field or woods on fire, or anything that’s nearby.”

All agencies urged residents to use caution when having a fire to burn brush, especially when conditions are dry and windy.

“When burning, you are supposed to be tending [the fire] at all times,” Jesswein said.

LANSING – On Friday morning, the Michigan Department of Health and Human Services updated its Gatherings and Mask epidemic order, allowing up to... read more