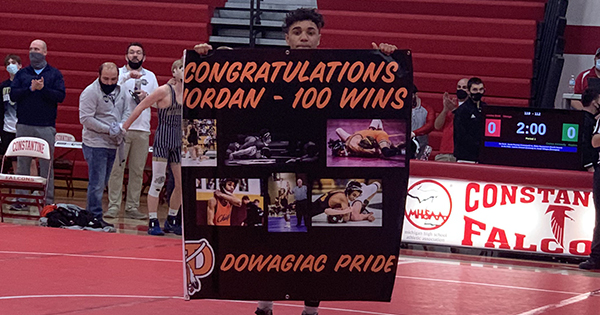 DOWAGIAC —  The Dowagiac wrestling team will send seven wrestlers onto the Division 3 Regional Tournament next Saturday.

The Chieftains, who will wrestle in the Division 3 team regional at Constantine on Wednesday, was led by district champions Jordan Simpson and Wyatt Bailey. Brandywine’s Hunter Heath also picked up a regional championship as the Bobcats qualified six for the regionals.

Simpson (18-1) was 2-0 on the day as he not only captured his second consecutive district championship, but earned his 100th career victory in the process. Bailey (21-0) finished third last year in the district round. He pinned his way to the title this year.

District champion Edwardsburg advanced eight wrestlers to the regional round. The Eddies did not have an individual champion.

Niles did not advance a wrestler out of the district round.

Cassopolis, who won its first team district title since 2005, advance to individual wrestlers on to regionals.

William Westphal (135) and Jaren Waldschmidt (160) were both fourth.

Tickets for all state tournament events being sold digitally