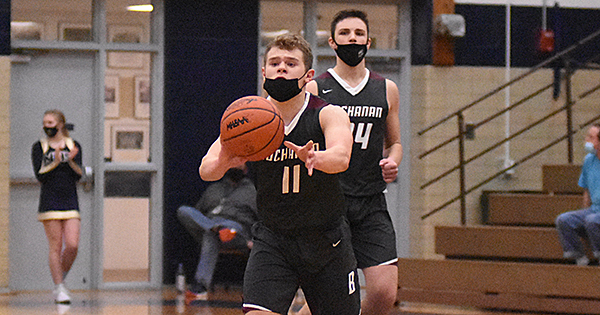 Johnny Rager (11) and the Buchanan Bucks wrapped up the regular season with a win over Niles Friday night. (Leader filed photo)

The girls team edged Niles 48-45 in a thriller and the boys cruised to a 46-37 win over the Vikings. The girls win gave the Bucks both an undefeated regular season and an outright BCS Red Division title.

Trailing 39-31 entering the fourth quarter, the Vikings reel off a 13-2 run capped by a Kamryn Patterson 3-pointer that gave the team a 44-41 advantage in the closing minutes. But the Bucks did not buckle under pressure and ended the game on a 7-1 run to clinch the win.

“I’m very proud of them,” said Niles coach Jessica Johnson. “They worked very hard and didn’t hit the shots we wanted to.”

“Kam Patterson has been doing a great job,” Johnson said. “They put a lot of pressure on her, but she did a great job. Alexis did very well. Her assignment was to guard Faith Carson and she held Faith to 13 points and did a good job. Sydney Skarbek dislocated her shoulder and came back to play.”

The Vikings struggled mightily at the free throw line, converting just 9 of 25 shots at the stripe.

“Free throws really hurt us tonight,” Johnson said. “We missed 11 free throws by halftime. We talked about that and talked about continuing to play defense.”

Niles was also down four players on Friday, which meant a short bench. Amara Palmer saw extended action in her third game back from injury.

“She played here a little bit against Comstock and Vicksburg,” Johnson said. “Tonight was probably the most she’s played. She’s not at 100 percent yet but at the same time, having her on-court really helps.”

“I told them I was proud of their effort but that it is time to put emphasis on next week. This is what we prepare for, it’s a whole new season. We talked about putting this game behind us.”

On the boys side, the Bucks came out swinging.

Buchanan started the game on a 17-2 run and took a 25-11 lead into halftime. The Vikings continued to fight and trimmed the lead to nine points late, but that was as close as it got.