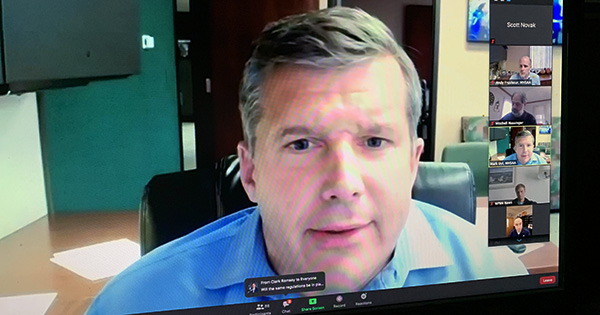 DOWAGIAC — Following Friday morning’s announcement by Michigan Gov. Gretchen Whitmer and the Michigan Department of Health and Human Series about mandating weekly testing for COVID-19 for ages 13 through 19 starting on April 2, the Michigan High School Athletic Association was quick to respond.

Executive Director Mark Uyl held a Zoom conference call with members of the media throughout the state to address what the MHSAA knows, but added that the state would not release key details until sometime on Saturday.

Uyl said he knows that the winter sports season will continue through its completion over the next couple of weeks, although spiking COVID numbers and teams dropping out of the tournament are both on the rise.

He said that current guidelines would continue through April 2, when the new requirements for rapid antigen testing must be conducted on anyone who will be participating in spring sports. The new guidelines will also require that any teams remaining in the state basketball and wrestling tournaments will also have to be tested as often as required by the state.

“We are a roll-up-your-sleeves, get-the-job-done organization,” Uyl said. “Our goal has been three seasons. We were able to give our fall kids a season that got to the finish line. The same goal has been in place for our winter, and that finish line is getting closer and closer every day. And that is not going to change for spring. If that means we have to put in some extra work and effort and have testing to make it happen safely and effectively, then that’s what we’re going to do.”

Uyl does not anticipate another shutdown like the one that came in November.

“We haven’t gotten any indication of (a possible shutdown) yet from MDHHS,” he said. “If you go back to the pilot testing program in January… that data does show sports can be done and done safely. I realize schools have reported more positive cases. Our schools knew when they brought kids and staff back for in-person learning, we would have more positive cases.”

The change in the guidelines may have caught the MHSAA a bit off guard, but Uyl is confident that the state can remain on track to begin spring sports practices on Monday as planned, with competition to begin shortly after that. He is hoping nothing in the information being provided on Saturday will detract from beginning the next sports season.

When asked if all the sports, or just contact sports, would be required to use the testing, Uyl could not give a definitive answer. Currently, only girls soccer and lacrosse are considered contact sports during spring competitions.

According to the new orders, testing must be used for anyone participating in sports, ages 13 to

19, which would include junior high and middle school sports. Uyl said spring is normally the busiest season for those schools.

“From the order, it does reference athletes 13-19 will be required to test,” Uyl said. “It isn’t just high school level teams, but also junior high and middle school teams. Some of our highest participation numbers come from middle school track and field programs. From what we understand, those athletes who are 13 (and up) would be required to test.”

NILES — Two suspects have been arrested in connection to a home invasion robbery in Niles, according to the Niles... read more