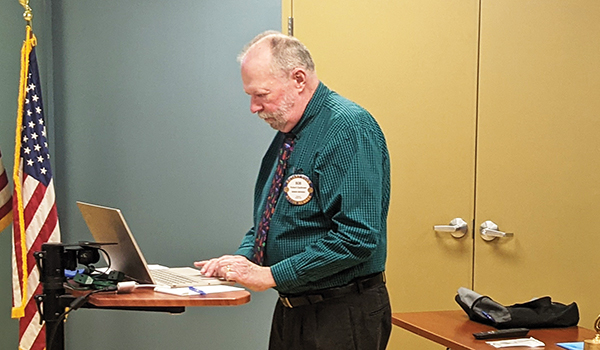 Cochrane, the current club president, was constantly switching between conducting the meeting in person while also monitoring the computer station for the club members attending via Zoom. Such is the way of board and club meetings in the pandemic era.

Cochrane filled his role admirably and has been tasked with keeping the club as active as possible throughout the pandemic. The meeting location as well as the meeting format has changed several times over the course of the past year, with the club shifting from in-person meetings to virtual meetings several times due to the fluid nature of health department guidelines.

“We had a few meetings as a group and then we didn’t meet for quite a while,” Cochrane said. “Then we started doing zoom meetings, and those started out very slow, but in a few weeks, we started picking up. We’ve had as many as 15 people in a Zoom meeting, and that was okay, but it’s not the same as being face-to-face with people.”

With the situation able to change at the drop of a dime, the pandemic has impacted the club’s ability to get things done. Several of the club’s annual projects and functions have been postponed until things improve.

“We haven’t been able to accomplish some of the things we’d like to accomplish, but they’re still there,” Cochrane said. “As we move back to a more of an in-person kind of setting I’m sure those things will pick up and get going again.”

Cochrane was sworn-in as president in June of last year and has been a member of the Dowagiac Rotary Club for 16 years and has been a Rotarian for 31 years in total.

“I’m a traditional kind of guy ,and so I tried to bring back some of the traditions of things that we’ve done and it’s been moderately successful,” he said. “I think those traditions help bring our new members along and get a better understanding of what we’re all about. There are lots of ways to run a club and they’re all valid but there are some things I wanted to try to do that we hadn’t done for a while.”

“We’ve been trying for two years, and we’ll get there,” Cochrane said. “We wanted to do it in the 100th year, and now it’s going to be probably at least a 102nd here before we can do it, but it’s a big milestone for us. We’re one of the earlier clubs, and there weren’t many around back then. We were an early club and would like to be able to celebrate that hundred years of success in the Dowagiac community.”

Cochrane is entering his last few months as president. His goals to increase club membership and improve the club’s visibility in the community have been hampered by the pandemic, but he still has high hopes for the club going forward.

“I would love to see us get back to our normal attendance and get to the position where we can start to attract new people again,” he said. “When you meet on Zoom every week, it’s pretty hard to attract new folks to that. So we’re hoping that by getting back to in-person meetings, we’ll be able to start bringing new people out and let them find out what Rotary is all about and get them interested in joining.”

DOWAGIAC — After a year of canceled events, organizers at a Dowagiac church are ready to get back to work... read more