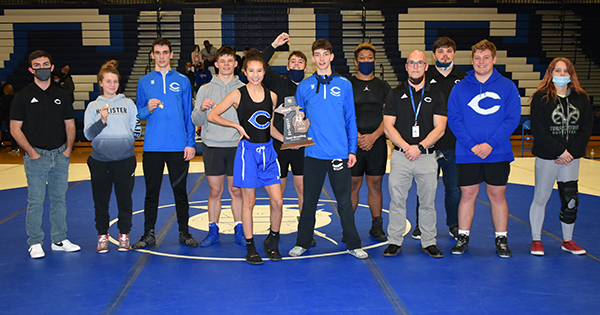 The Rangers, who filled about half of the weight classes during the regular season, picked up a couple of extra bodies for the state team tournament. With its helping hands, Cassopolis was able to defeat Eau Claire 36-21 and River Valley 48-12 to win its first district title since 2005.

“It was a great win for Cassopolis tonight,” said Ranger Coach Chad Gardner. “It has been since 2005 since we won a team district title. Looking forward to next week for team regionals. We have to get back to work on taking care of some things that we saw tonight.”

In the championship match against Eau Claire, the Rangers won all of their matches by forfeit. The only weight classes that were contested came at 152 and 160. Keane Yanez, of Eau Claire, defeated Jaren Waldschmidt 6-5, while Aiden Fisher, of Eau Claire, pinned Collin Bogue in 3:34.

Against River Valley, William Westphal pinned Jack Lantz at 135 pounds in the only contested weight class.

Cassopolis, which hosts the regional, will face Schoolcraft in the regional semifinal. In the other semifinal, Decatur will wrestle Lawton. The winners advance to the state quarterfinals at the Wings Events Center in Kalamazoo.

BERRIEN COUNTY — Berrien County residents have a number of opportunities throughout the year to recycle and safely dispose of... read more