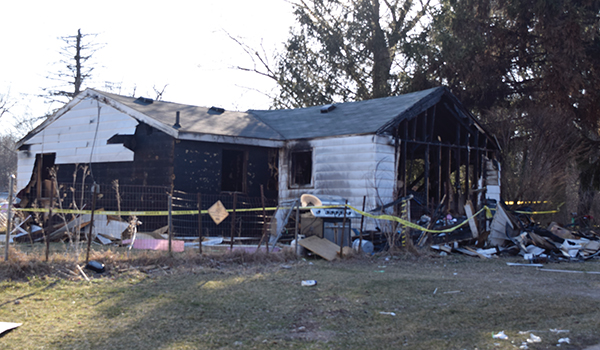 HOWARD TOWNSHIP – A family is trying to put the pieces of their lives back together after a fire destroyed the home they were staying in on Feb. 21.

The challenge today is moving forward from the total loss, which consumed the home they lived in and all of their belongings. Without the property being under their name, after the owner passed away, the granddaughter of the previous owner, Jennifer Holley, said her family is trying to work with Cass County to get things back in order and under her family’s name.

A Gofundme was set up for the family on March 9, titled “Help my daughter’s family recover from a fire.” It is organized by Margie Bass.

“They’ve got donations for clothing and basic necessities,” Corzine said. “[The property] has been in their family a long time. They have no financial resources. We are trying to work something out with different people around [Barron] Lake.”

According to Chris Corzine, the fire call came in just after 9 p.m. on Sunday, Feb. 21 for a fire at the corner of Bartak Street and Huntly Road.

“I got there first on the scene. There were heavy flames showing form the side of the home, where the kitchen was at,” Corzine said. “When I arrived, all of the occupants were out, but they were still very close to the structure.”

He arrived at the site within six minutes of the call.

“It was already heavily involved in fire,” Corzine said of the house. “A grease fire just took off.”

Three adults and a 16-year-old boy had escaped the home.

“They were all dragged out by the [teenager],” Corzine said.

The house was a total loss, and some pets were lost in the fire.

“That’s the most heartbreaking part of it,” said Jennifer Holley, who is the mother of the teenager.

The house not being under any of the most recent occupants’ names presented a challenge to the family.

“Where we were living was my grandmother’s home. When she passed, she did not leave a will, so I had been trying to save to get the property transferred to me,” Holley said. “We lost everything because I couldn’t insure the house, because my name was not on the title.”
The family is low-income, and is hoping they can work with Cass County to get the property moved under their name. But it will be a challenge.

“The county approached us about this, saying it will cost between $8,000 to $10,000 that they would attach to our taxes, and our taxes are already behind because when I took over the house it was already several years behind,” Holley said. “[We] have been struggling just to keep the property.”
Without being able to sell the property, since it was not under her name, Holley said she it was a difficult situation before the fire.

“That house meant a lot to me,” Holley said. “It’s the house I grew up in. [My son] was doing a lot of work to help us restore the house to what it used to be, and to make it handicap-accessible for his dad.”

Corzine said one of the adults in the house that was lost usually lives in a house next door, but was having furnace issues so they had moved into the other family’s house temporarily. The family has moved into the house next door to the property for the time being.
Corzine said the teenager helped get his grandmother, aunt, Holley, and father out of the burning house and to safety. Once on the scene, he helped the teenager get the family further away from the house before more firefighters with trucks arrived.

Corzine recalled seeing the wheelchair the father used still in the hallway the family used to exit the house. It had gotten stuck, and the man had sustained burn injuries as his son worked to remove him from the home. His injuries were treated in a hospital burn unit for about a week. The teenager suffered some burns from the fire. The two women were treated for smoke inhalation.

“The injuries, for the most part, are healed. My husband is going through physical and occupational therapy to recoup his strength from before the fire,” Holley said.

Corzine said the fire is not under further investigation.

CASSOPOLIS — A short-handed Cassopolis wrestling team played the numbers game just right and came away with a Division 4... read more