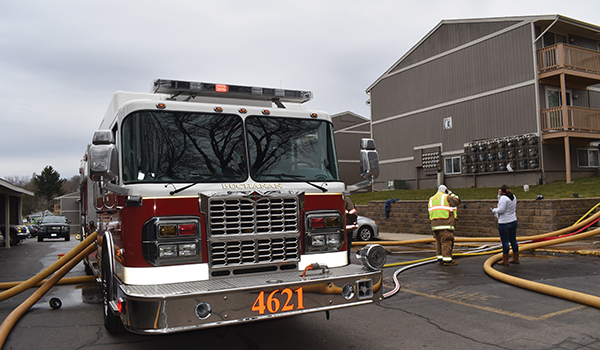 BUCHANAN — Tuesday, Buchanan resident Harley Scoggin spent the day swinging between two emotions. One moment, she would be happy to be alive. The next, she would be hit with the realization that she had just lost everything.

“It’s crazy to go through the store and realize you have nothing,” she said. “You’re walking through the aisles going, ‘oh, I need that now. I need that, too.’”

Along with her husband, Clay, and two young sons, Scoggin was one of more than two dozen families to lose her home and belongings in a fire Monday at Buchanan’s West Wind Apartments. While no residents were injured in the fire, many apartments were a total loss, leaving residents with no home and many of their belongings damaged.

“Everything is destroyed by smoke and water. The apartment is basically gone,” Scoggin said. “There were some irreplaceable things in that apartment, like a teacup my grandmother had gotten in India that was important to me and photos of my children and a lot of antiques that were really special to my husband and me.”

Though Scoggin had no renter’s insurance, she said she is lucky to have family nearby. Her in-laws set up a GoFundMe page that had raised nearly $5,000 as of Wednesday morning. However, many residents do have access to the same help Scoggin got from her family, which is why Buchanan charitable organizations stepped in to help.

Since the fire, community organizations, including Redbud Area Ministries, Michigan Gateway Community Foundation and the American Red Cross, have partnered to collect resources to aid families displaced by the fire.

“Right now, we are focused on meeting the immediate need,” said Jan Nowak-Waters, executive director of RAM. “But [victims’] needs are not going to be over tomorrow or next week. I want to stress that when the rest of us are done with the horror of the fire, the people who suffered it are going to continue to suffer it, and their need is going to go on longer than our awareness will. I want people to remain vigilant and aware and to pray on how they can help because these people are going to need continued support.”

To aid fire victims, RAM, 708 Redbud Trail N., Buchanan, is currently collecting donations of clothing of all sizes, food donations, gift cards, personal care items, toiletries, white vinegar, which can help remove smoke smell from clothing, and pet food. Nowak-Walters asked that community members do not bring larger items like furniture to RAM due to limited space. Instead, she asked that those willing to donate furniture call RAM at (269) 695-5083 to let staff know what they have. RAM will then create a list of available items to share with victims.

Michigan Gateway Community Foundation, 111 Days Ave., Buchanan, is also collecting donations to be taken to RAM. However, according to CEO Michael Rowland, the foundation’s expertise is collecting monetary donations to help get families back on their feet. Community members looking to donate to help those displaced by the fire can do so in person at the foundation or on its website at mgcf.org.

“Michigan Gateway has been a long fixture of philanthropy in the Buchanan area, so when we saw that some of our community members were displaced, we thought we wouldn’t be doing our job if we didn’t step up to the plate and help these folks,” Rowland said. “We do a lot of partnerships with organizations like the Red Cross, so we know they can be stretched thin with all the different work they do. We were looking, for the most part, to be another party to help them. … We will be reaching out to the people individually, and hopefully, these funds will help them get back on their feet.”

Both Nowak-Walters and Rowland said they had been moved by the community’s response to relief efforts to help those displaced by the fire.

“The community support has been wonderful,” Rowland said. “We’ve actually gotten more support on this than many of the other projects we have done in the past. I think people are drawn to help because they know the money is going directly to the people affected. When things like this happen, the Buchanan community has a way of stepping up and making sure that everybody is made whole.”

At RAM, Nowak-Walters said she hardly had a minute to sit down Tuesday, as she was taking in donation after donation.

“If something like this has to happen, Buchanan is the place where it should happen, because man, oh, man, this community is responsive,” she said. “The response from the public has been astronomical, which is good because the need is astronomical.”

Though Nowak-Walters said only a few displaced by the fire had contacted her as of Tuesday afternoon, she expects more and more requests for aid to come soon as the Red Cross directs victims to RAM.

One such person would be Scoggin, who said she planned to reach out to RAM this week. Though she and her family are still reeling from the fire, she said she has been “overwhelmed” by the community’s response to helping those displaced.

“We are in shock,” Scoggin said. “It’s such a strange feeling because we are so grateful, but we feel so bad for [our neighbors] involved in the fire.”

BUCHANAN – A Buchanan High School senior had her work selected to be included a special print section of The... read more