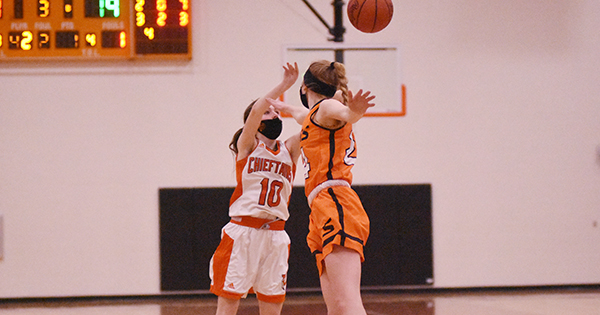 DOWAGIAC — With one week remaining until the start of the state tournament, area basketball teams are trying to build some momentum heading into the postseason.

Unfortunately for host Dowagiac and Niles on Saturday, they will have to wait until the final couple of games to start building that momentum.

Both teams came away from home games with losses that they will look back on and ones that got away. Dowagiac could not dig its way out of a 21-4 hole in the first quarter, as the Chieftains dropped a 37-31 decision to Wolverine Conference foe Allegan. Niles led visiting St. Joseph 15-10 after one quarter, but could not hold off the taller Bears in a 64-55 setback.

A lack of first-quarter defense and shooting woes kept the Chieftains from picking up its second conference win of the season.

According to second-year coach Jason Turner, had his team not given up 21 points in the first quarter, it would have defeated the Tigers. Dowagiac outscored Allegan 27-16 over the final three quarters, but could not get any shots to fall, especially in the second half.

“We came out and gave up 21 points in the first quarter,” Turner said.  “We only gave up 16 more points the rest of the game. It was the best we played defensively all year those last three quarters. We have to do a better job of getting the first quarter jitters out of the way. We saw things that we have worked on in practice start to carry over into the game today offensively.”

Carlee Rynearson had 11 points to lead the Tigers.

Despite having a trio of players score at least 13 points, Niles could not overcome the size and pressure defense of former SMAC West Division foe St. Joseph on Saturday.

The Vikings led by five points after the opening quarter, but were outscored 54-40 the rest of the way as St. Joseph improved to 7-4 on the season.

Patterson also had four assists and a pair of steals, while Lucero and Skarbek also grabbed six rebounds and had three steals.

Symone King had a game-high 26 points to lead the Bears. Cailynn Junk added 13 and Avery Blomgren 11.

DOWAGIAC — As the nation marks the one-year anniversary of the pandemic, at month’s end Lynsie Stolpe will conclude her... read more