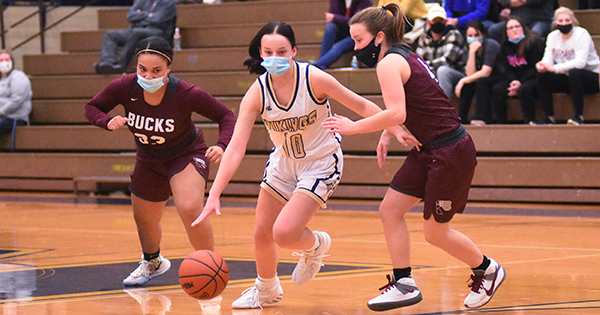 SOUTH HAVEN — A quick start helped the visiting Niles girls basketball team rebound from a tough loss to Edwardsburg earlier in the week.

The Vikings jumped out to a 17-3 lead on South Haven and went on to defeat the Rams 52-37 in a BCS Athletic Conference non-divisional contest Friday night.

The Vikings (8-4) cooled off in the second quarter, but took a 25-17 lead into halftime. Niles outscored South Haven 27-20 in the second half to pull away for the win.

The Rams (4-7) got a game-high 18 points from DayShauna Crowley.

Host Cassopolis came close to picking up its first win of the season, but a late surge by Decatur allowed the Raiders to escape with a 48-43 victory Friday night.

The game was close throughout, with both teams holding leads in all four quarters.

Morgan Hall had a game-high 20 points to the Raiders, who also got 12 points from Laurin Ogrin and 11 points from Leah Baushke.

EDWARDSBURG — It seemed like everything was working for the Edwardsburg boys basketball team Friday night. The Eddies used a... read more