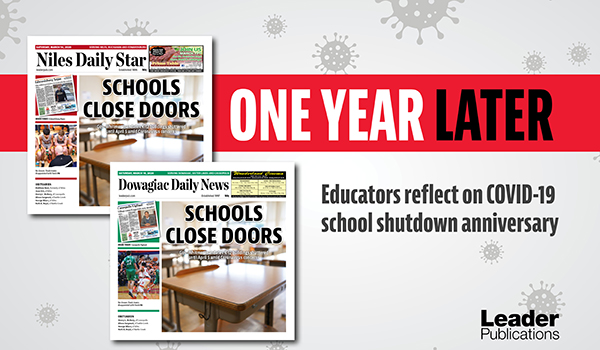 SOUTHWEST MICHIGAN — On March 13, 2020, Michigan students packed up their bags from school for what was, initially, just a temporary break through April 5.

The three-week pause was in response to the arrival of COVID-19 into the state on March 11, 2020, when the first two patients tested positive for the virus in the Detroit area.

With mandates, guidance and information shifting on a weekly — and sometimes daily — basis, students would ultimately not return to classrooms for the remainder of the school year.

One year later, school administrators look back on the day schools first closed due to the coronavirus pandemic as one of the impactful moments early on in the region.

Niles Community Schools Superintendent Dan Applegate remembers thinking whatever was coming could not be too drastic of a change for the schools. When he received communication about the three-week shutdown, he had to take a moment to realize what it meant.

“I was shocked,” Applegate said.

On Wednesday, Applegate remembered hearing how the NBA was pausing its season due to the arrival of the virus.

“I thought, ‘wow, pro sports are a big thing,’ but I thought they would never close the schools because we are too essential to the community,” Applegate said. “I never, ever, ever thought schools would be closed. Then we found out they would be.”

He said it kicked off a thought process considering “how” schools could shut down, and how would they find ways to continue providing all of the services schools do to their students and
community.

“Parents had to be just as shocked,” Applegate said. “We were all thrown in together at once, the parents, students, schools and community. We were left to figure it out. But that’s what we did here in Niles — we all worked together to figure it out. We are still doing that now.”

Not far away, Merritt Elementary School Principal Matt Severin remembers when the thought of that Friday went from a lighthearted joke to a suddenly very serious situation.

“The week before, there were memes and jokes about how there was going to be a full moon, daylight savings weekend and Friday the 13th all at once,” Severin said. “It went out the window on Friday.”

A little more than 20 minutes away, Dowagiac Union Schools Superintendent Johnathon Whan said the school community as a whole was surprised by the closures.

“At the same time, we knew something was going on,” Whan said. “The difficult part was not knowing. It was the uncertainty of ‘how long [would this last]?’ It was probably the first time in my career, for the longest time, where I said, ‘I’m not sure’ or ‘I don’t know’ as many times as I had to.”

Further south at Brandywine Community Schools, Superintendent Karen Weimer said that as soon as she received communications about the closures, around 10 p.m. on Thursday, March 12, she was immediately in contact with building administrators.

“There was a lot of scrambling that night and hitting the ground running that morning,” Weimer said. “There was fear that day. This had never happened in our lifetime. We had a lot of concerns for our families, students and staff. It was very emotional on everybody’s part.”

“Looking back, I could sense it even in the hallways. Even the kids have that feeling,” Beasley said.

The middle school was set to have a half day for parent-teacher conferences. The conferences were canceled, and Beasley re-arranged the day’s schedule
quickly.

“I remember meeting the teachers in the same room, that was before limits on gatherings. We weren’t even masked up. I brought them all in the same room and we just rattled out a plan,” she said. “We came together as a teaching unit. We just thought it was going to be three weeks. We were going to focus on the social well-being of the kids.”

The leadership team, director of transportation, building principals and director of food services pulled together to figure out how they would still create access to the necessary services students needed. Equity for online instruction access was also an early conversation, and packets were put together quickly for students without regular internet access.

On that Friday, Beasley shifted the schedule for a reason she looks back now and sees was more important than she realized at the time.

“We wanted every single kid to see every single teacher that day. I wanted them to get what they needed to take home with them,” Beasley said. “They could get what they needed to know about the plan for that class, and to be in front of that teacher one last time. There were a lot of kids who were excited, but also kids walking out in tears. It was unknown at the time. We really didn’t know it would be the last time they were in the building.”

In the meantime, Buchanan High School Principal Stacey DeMaio was also shifting around the students’ half day on Friday.

She said the staff worked through the break to try to figure out what the plan was moving forward for everyone. However, that proved challenging as communications from the state kept shifting.

“We were hearing different communications coming down from the state on what would count and what wouldn’t,” DeMaio said, in regards to things like attendance and tests. “We had to play it by ear and figure out what we could do with the parameters we had been given.”

A year removed from that fateful Friday the 13th, Buchanan High School and Brandywine Middle/High School are finishing up a week of remote learning due to staff shortages and a number of students being homebound in quarantines due to COVID-19 exposures.

It is one of the multiple new precautions students, parents and educators have adapted to throughout the school year.

“The virus has put us on our toes and made us rethink some things,” Weimer said. “We’ve had a year to see how things work and did not work, and get another shot at it as we approach the one-year mark.”

With protocols in place, Weimer said the shutdown increased the appreciation everyone had for in-person instruction.

Whan said the past year challenged everyone, but he saw educators become faster learners.

“This will help us be better when we get back to the more traditional consistency of face-to-face, closer interaction,” he said. “We will have skillsets that will aid us in that situation. We can keep looking forward and being positive and being open to how we can make a situation better and learn to be more successful.”

“Now, everybody has their masks on in the store. I am in a kindergarten through second grade building and have 5-, 6-, and 7-year-olds that are great at keeping their masks on,” Severin said. “It’s how we operate. A year from now, there are going to be some processes still in place due to COVID-19. Our questions always go back to, ‘if the change is good for the kids, we’ll keep it.’”

At Buchanan High School, DeMaio said she has never communicated with students, teachers and the staff as much as she has through the past year.

“I have never written so many newsletters in my life. I’m always writing a newsletter and trying to keep people informed,” she said. “It’s a communication explosion. … We are all doing new things and trying to accommodate students to give them the best opportunities
possible.”

After a year of challenges, teachers and administrators have become even more resilient through the pandemic, adapting to change after change. Now, school staff members are beginning to receive COVID-19 vaccinations and are preparing, once again, to enter into a “new normal.”

“One year ago, we were there, and now we are getting our vaccines,” Applegate said. “We still don’t have all the answers, but we have much betters answers of what we can do in this type of situation.”

LANSING — To continue progress toward state’s goal of vaccinating 70 percent of Michiganders over age 16 and bringing a... read more