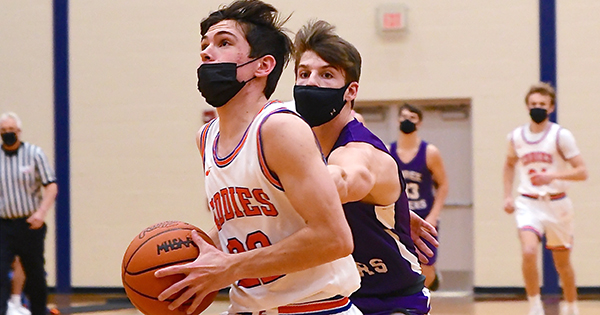 EDWARDSBURG — It seemed like everything was working for the Edwardsburg boys basketball team Friday night.

The Eddies used a 21-4 first-quarter run to propel themselves to a 69-21 victory over visiting Hartford.

Edwardsburg used defense to fuel its offense, stepping into passing lanes which led to easy baskets on the other end. Hartford’s Kaden Johnson was a player the Eddies were determined to stop and was ultimately held to 11 points.

“Right out of the gate, we brought energy on defense,” said Edwardsburg coach Steve Wright said. “As a team, we forced Hartford into tougher looks. Johnson is a tough matchup so we had some attachment on him. We forced him out on the perimeter which minimized his effectiveness.”

After wins over Niles and Hartford this week, Edwardsburg (7-3) turns its attention to next week’s games against Vicksburg and Dowagiac to cap the regular season. Wright is hoping to end the season with plenty of momentum heading into postseason play.

“At this time of year, we’re trying to clean up a few things,” he said. “We’re making sure we’re good on defensive positioning and that our scouting reports are thorough. We’re working on skill stuff, we want guys getting shots up and stressing things on offense. We’re making sure guys are prepared for what we see against Vicksburg and Dowagiac. We need to play Edwardsburg basketball and hope to keep the momentum.”

Like their counterparts, the Edwardsburg girls basketball team used a big first quarter to propel itself to another victory.

The Eddies outscored the Indians 20-2 in the first quarter en route to a 54-13 non-conference victory that improved their record to 8-3.

Katie Schaible led the Eddies with 15 points, while Macey Laubach finished with 12 and Caitlin Tighe 11.

Alexis Snodgrass had eight points for Hartford, which falls to 8-5 on the season.

CASSOPOLIS — A Marcellus man who was hospitalized after he tried to hide methamphetamine by eating it was sentenced to... read more