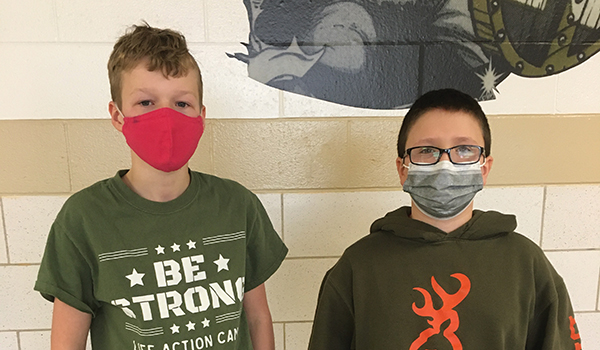 Three students made it to the round, including sixth-grader Claire DevlescHoward and seventh-graders Corbin Chism and Logan Boykin.

“We started out as just a normal spelling bee at the school to find our top three spellers,” Jones said. “Then the students had to take an online test [March 2] to find their rank.”

In a departure from traditional spelling bees, the qualifying method gave students a 30-minute test where they had to listen to words and type them the way they would spell them.

“They had 50 words to spell,” Jones said. “It ranked them on how they did with Tonya Snyder at the Berrien RESA.”

The test was hosted on the Scripps Howard National Spelling Bee platform.

Snyder headed up the Cloverleaf Spelling Bee. She works for the Berrien RESA Math and Science Center and is the Student Activities Coordinator.

“[The pronouncer] and judges will be gathered at the Berrien RESA, and we will administer the ‘bee’ from there,” Snyder said of the final format. “The top 16 finalists will be ‘Zooming’ in to interact with the judges and pronouncer from the comfort of their school buildings.”

The students from Ring Lardner who represented the school in the qualifying round were eliminated before the March 9 event.

Due to the format of the 50-word test, students were not “knocked out” by a single word, but by overall score.

“It was really good competition at the school,” Jones said.

She reassured the finalists that they would get another chance to compete in next year’s Cloverleaf Spelling Bee.

CASSOPOLIS — This week, one Cass County organization recognized individuals who advocated for children over the past year. During a... read more