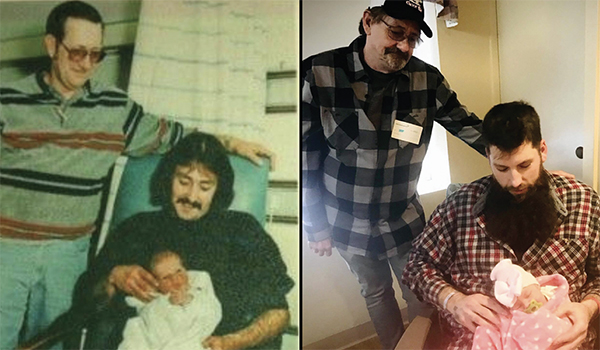 NILES — On March 7, 1991, Thomas Vaughn spent his 30th birthday pacing the floors of a hospital room waiting for the birth of his son, Joe.

Thirty years to the day later, Thomas was back in the hospital — this time for the birth of his granddaughter. 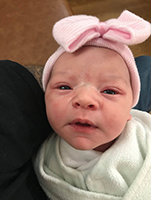 Last Sunday, Aspen Raine Vaughn was born to parents Joe and Ashli. While the birth of any child is cause for celebration, Aspen’s birthday came with an extra dose of joy for the family, as she became the fourth generation of Vaughns to be born on the same day.

Aspen now shares a March 7 birthday with her late great-grandfather, James, born 1935, grandfather, Thomas, born 1961, and father, Joe, born 1991. According to Guinness World Records, only seven other families have been recorded as having four generations born on the same day.

“I can’t explain it, but it’s literally one of the most remarkable things I’ve experienced in my life,” Joe said. “Growing up, I always saw the joy my father felt being able to share a birthday not only with me, his son, but also his father. Now, I get to do the same thing, and I’m already beside myself. For this to happen the way it did, it just blows my mind.”

“I thought it was amazing enough when [Joe] was born on my father’s and my birthday,” Thomas added. “When the fourth generation was born, I thought that was overwhelming. It does not happen very often.”

However, around 2 a.m. March 7, hours before Ashli and Joe were scheduled to be at the hospital, Ashli went into labor. Then, within an hour of grandfather Thomas arriving at the hospital, baby Aspen was born.

“[Aspen] decided to come on her own,” Joe, who has two other daughters, Boston and Keslee, said. “It was fate. I believe things happen the way they should.”

After the birth, Joe and Thomas recreated a photo Thomas had taken with his father right after Joe was born.

“I wish [my father, James] would have been able to be here to see this,” Thomas said. “I think he would have been overwhelmed, especially as this wasn’t planned. I think this was a sign from my dad.”

Now, Ashli and Joe are settling into life with newborn Aspen. When Aspen’s first birthday rolls around next year, both Joe and Thomas said they are looking forward to celebrating all three of their birthdays in one.

“I’m 30, so I don’t really care about my own birthday, but now being able to share a day with my daughter gives me a new reason to celebrate,” Joe said. “As long as we are together, I know it will be a great day.”

“We are going to celebrate together, just like we did when my dad was alive,” Thomas added. “It’s going to be one big party.”

SOUTHWEST MICHIGAN — As of Thursday, Berrien County reported 10,928 COVID-19 cases and 226 deaths, according to the Michigan Department... read more