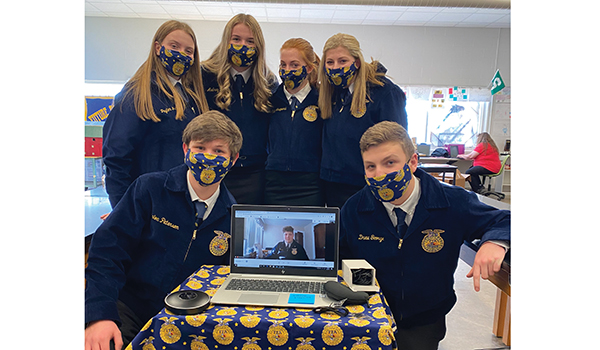 NILES — The Niles Future Farmers of America chapter announced last week all of its 19 participants had advanced to the state contests after regional competitions.

“It was just amazing. I am so proud of these kids for hanging in there and working through,” said Cheryl Rogers, Niles FFA advisor and agriscience educator at Niles High School.

Rogers said, in a usual competitive season for the FFA, students would be traveling to other schools. In the past, when they had made it to the state level of competition, students, family members and supporters would travel to Lansing to Michigan State University for a large competition where they could meet other FFA members and network.

This year, the competitions are being hosted over Zoom.

“All of the contests have taken place in the high school,” Rogers said. “For state, we are going to move somewhere else. I can’t have students doing the contest in my classroom with the bell ringing.”

With the adaptations and changes to competitions, Rogers said students have done well with rolling with the shifts and overcoming the challenges to place and advance.

“We even had one of our students who was quarantined, and he ‘Zoomed’ into the Zoom meeting,” Rogers said. “He had a three second lag, and a hard time getting the chairman’s attention, but those kids were able to pull it off and got a first-place gold ranking.”

Students competing in groups have to wear masks when working together during Zoom competition, which can also make it difficult for the judges to discern each person’s contribution.

Students have continued to diligently practice with their teams after school and over the weekends in preparation for their events, even without the promise of going to MSU for state competition, Rogers said.

“Just attending the entire state convention is magical. That part has had to change this year to keep everyone
safe,” she said.

Rogers recalled that in March of last year some of her students had worked for three and four years to get to the national level of competition. With the shut downs, due to COVID-19 arriving in the region, Rogers said students had “their dreams just shattered.”

“They had worked toward that goal, and it never happened,” Rogers said. “Usually there’s between 30 and 48 states you are competing against. That’s huge to represent your state and have that honor. I had some really disappointed students. Their resiliency and attitudes should be commended.”

Family, friends and school administration are usually able to be a big part of the in-person support for competitions
as well.

“It takes a village,” Rogers said. “I’m blessed to work with such a positive group. My principal is so supportive, students are following protocols. We are just making sure we are able to do this with the students, and do it safely.”

The students will compete in the State Level Leadership Contests beginning March 22.

CASSOPOLIS — A former Dowagiac resident who stole her landlord’s truck is getting the chance to stay out of prison.... read more