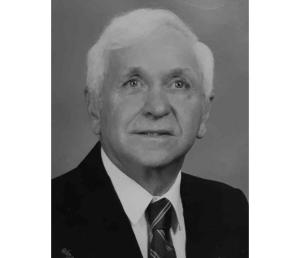 Robert Lee “Bob” Allen, 90, of Edwardsburg, died peacefully at home Monday, March 8, 2021, in the comfort of his family’s presence.

His life began Jan. 24, 1931, in Edwardsburg, the youngest of four children born to Charlie and Eva Allen. He married Mary Ellen Huffman Oct. 21, 1951, in Elkhart, Indiana. After more than 67 years of being happily married, she preceded him in death in 2019.

He was close to everyone on both (Allen and Huffman) sides of his family. His children will remember their dad going fishing and playing backyard sports with them. He especially enjoyed being with his brothers for a weekly get-together and cherished opportunities to attend his grandson’s school activities and sports.

Bob was a Christian in doctrine and service, trusting the Lord Jesus for his salvation and lending a helping hand to others at any time and for any reason. He was a long-time member of Mason Township Baptist Church serving on several boards and participating in church activities. He was mechanically inclined and could fix anything.

He served honorably in the U.S. Marine Corps. After being Honorably Discharged, he worked many years with Cass Oil Company and later with Service Oil Company, taking pride in caring for and building relationships with his customers, retiring in 1996.

In addition to his wife, he was preceded in death by his parents; one sister, Betty Oaks; and two brothers, Carl Allen and Roger Allen.

Mr. Allen will be laid to rest with his beloved wife in a private family ceremony in Five Points Cemetery in Mason Township.

The family prefers contributions in memory of Bob be made to Mason Township Baptist Church, 20109 Mason Street, Cassopolis, Michigan 49031.