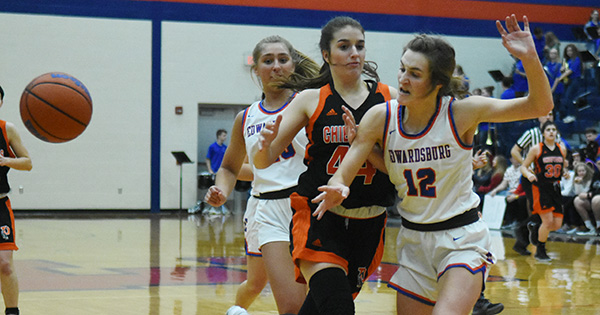 NILES — The Edwardsburg boys basketball team took care of business on the road Wednesday against Niles.

Edwardsburg led 26-11 at halftime and withstood a second-half surge from the Vikings in a 46-33 win.

“I thought we had really good energy coming out of the gate,” said Edwardsburg coach Stephen Wright. “Our man-to-man defense was solid. We were where we needed to be, and we fought through screens. We played terrific defense for a quarter and a half. Niles came back in the second half and made some individual plays. We missed some shots and weren’t as crisp as we were in the first half.”

Wright liked his team’s rebounding effort, which he felt led to productive games from Hafner and Stowasser.

“From a team standpoint, we did a good job rebounding,” Wright said. “Max and Luke were able to knock down shots from 5 to 7 feet from the basket and made some plays. Our defense was key to getting opportunities on offense.

“At the end of the day, we’re happy. Anytime you get a win on the road is a good thing.”

The Eddies (6-3) host Hartford on Friday and hope to keep the momentum going.

“Hopefully, we will keep the train rolling.”

EDWARDSBURG — After a slow first quarter, the Edwardsburg girls basketball team put the pedal to the medal against visiting Niles on Wednesday.

“The girls played very well tonight. It was a total team effort,” said Edwardsburg coach Jon Pobuda. “They were unselfish, and we had a ton of assists. We struggled to hit shots around the basket, but once we started making them we really took off. I thought our defense did a great job of setting the tone for us.”

“We are trending in the right direction heading into districts,” Pobuda said.