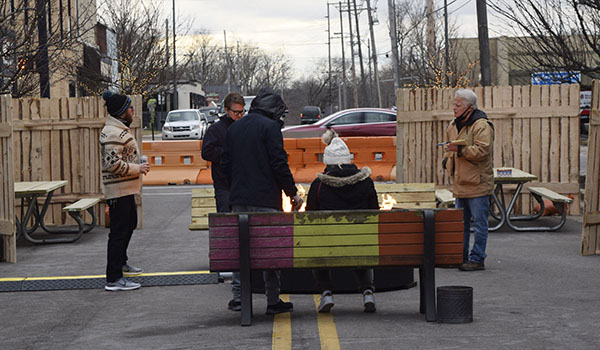 Pictured are area residents enjoying The NODE when it first opened.

NILES – At the Niles City Council meeting on Monday evening, a local business owner hinted at some downtown business owners hoping for a change in location for The NODE.

Stephanie Reno, owner of SLR Pilates and co-owner of Trap House 24 SLR, addressed the council members during the public comment portion of the meeting with her concerns.

“I wanted to ensure that all city council members received the letter that I had submitted, and the petition from local business and property owners that would like to see the project of The NODE flourish, but in a different place.”

Reno stated businesses around The NODE, located just inside the intersection of Second and Main streets, would like to see the street open back up and allow “normal flow to happen again.”

She said she hoped The NODE could be relocated and do well in another location.

The NODE’s continued installation is set to be voted on by city council members on April 12.

“Some of the businesses really want the opportunity to have back our space that we’ve had for the time we’ve been in our businesses,” Reno said.

Trap House 24 SLR is located at the corner of Main and Second street.

At the Jan. 12 Niles City Council meeting, councilmember Gretchen Bertschy passed along concerns she had heard from patrons of Trap House 24 SLR concerning the placement of the wind breaks, due to safety purposes. The wind breaks were moved to the other side of the street the following week.

During the same meeting, Harry Thibault, owner of the building at 211 N. Second Street, voiced support of The NODE’s concept, but had concerns about its configuration and the gas line to the fire pit.
Reno could not be reached for further comment.
Lisa Croteau, director of marketing and administration of the Niles Downtown Development Authority/Niles Main Street, declined to comment on the petition.