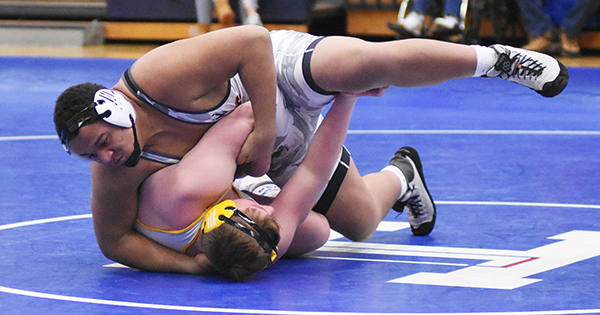 The MHSAA has announced that both the team and individual state finals will be at the Wings Event Center in Kalamazoo. (Leader file photo)

NILES — With one week to go before the start of the Michigan High School Athletic Association state wrestling tournaments, area coaches are excited their teams will be getting a chance to compete for a state championship — both as teams and as individuals.

The coaches are even excited to learn that the championships will be hosted in Kalamazoo instead of Detroit for the individual state finals, just as the team tournament will be.

What coaches are not excited about are certain changes to the format, which could force some of their wrestlers into a lot of matches in a short period of time.

The MHSAA announced that both the team and individual state tournaments will be hosted at the Wings Event Center in Kalamazoo. The Event Center has been the host of the team state finals each of the previous two years. Normally, the individual tournament would shift to the east side of the state and Ford Field in Detroit.

However, due to a shortened season due to COVID-19, the MHSAA was forced to find a new site for the individual finals for the 2020-21 season.

“We are wrestling, and no matter how we go about it, at least we are competing,” said Cassopolis Athletic Director and Assistant Coach Chad Gardner. “With a winter sports season that was so up in the air, we will take it any way we can right now. The athletes will still feel the ‘awe’ of being in the state finals. This is a special time for the athletes and their teams. Being a southwest Michigan school, I love that it is being held in Kalamazoo. This should allow more fans to make the journey as long as we stay within the seating capacity limitations.”

“I am glad that we have a planned final,” said Niles Coach Todd Hesson. “Much shorter trip. I’m guessing it was also affordable.”

“It will be a different experience,” said Edwardsburg Coach Jesse Becraft. “It will be nice not to have to travel as far, but it becoming a one-day tournament will also make things a little different preparation-wise. To me, the biggest thing that I am not a fan of is only one parent being able to attend, which hopefully they take another look at.”

Spectator limits for the regionals and finals will be determined locally following the Michigan Department of Health and Human Service order and will not exceed one per participant, the MHSAA announced.