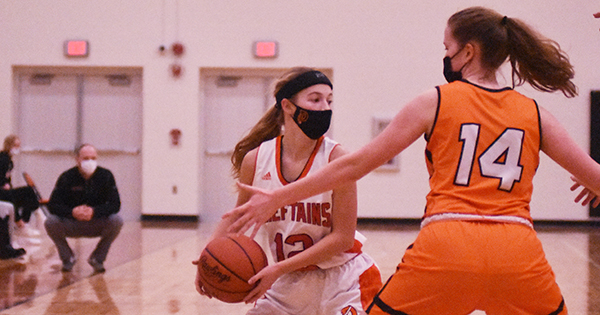 PAW PAW — As the girls basketball season enters its home stretch, several teams are trying to figure out what needs to be done to finish the regular season on a strong note and just how far they can go in the postseason.

Throw in the ever-growing number of games being canceled due to COVID issues, and just how many more attempts each squad will have is an unknown at this point.

On Monday night, three area teams moved a step closer to finishing the regular season as Dowagiac lost to host Paw Paw in Wolverine Conference action, while Edwardsburg picked up another league victory on the road over Vicksburg. Buchanan remained undefeated with a win over Michigan Lutheran.

The Chieftains were trying to win back-to-back games Monday night, but were only able to keep it close with the Red Wolves for about 10 minutes before falling 56-27.

The Chieftains were never able to challenge the Red Wolves in the second half, as Paw Paw led 39-21 after three quarters.

“We have to do a better job of taking what we work on in practice and making sure we use it in the game,” said Dowagiac Coach Jason Turner. “We continue to work on playing under control. We just need to realize the game is just another day of playing basketball.”

Calley Ruff score 11 points to lead the Chieftains, who also got seven points from Alanah Smith.

Katelyn Baney and Taylor Rickli scored a game-high 14 points to lead the Red Wolves, who improved to 4-8 overall and 3-6 in conference games.

While the Wolverine Conference boys game was canceled between these two schools, the girls game was played as planned, with the Eddies getting off to a quick start and pulling away over the remaining three quarters for the 49-26 victory.

Katie Schaible scored a game-high 15 points for the Eddies, who also got nine points from Averie Markel and seven points from Haley Masten.

The host Bucks improved to 9-0 on the season with a 53-36 win over the Titans Monday night.

Buchanan turned an eight-point first-quarter advantage into a 12-point (26-14) halftime lead. The Bucks stretched that lead to 23 points (43-20) by outscoring Michigan Lutheran 17-6 in the third quarter.

Brooke Gerlach and Sophee Garcia both scored six points for the Titans, who fell 8-3 on the season.

BUCHANAN – A cannabis celebration sometimes called “Weed Day” in other parts of the country is coming to downtown Buchanan... read more