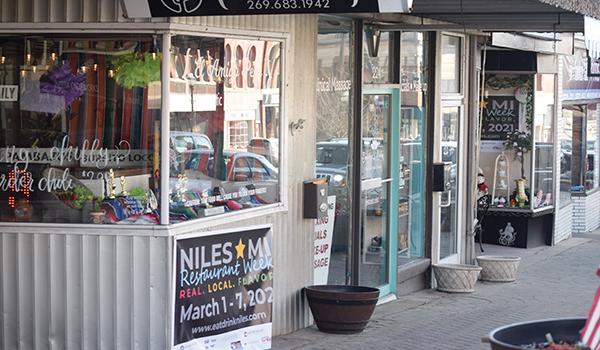 NILES – With Niles’ first Restaurant Week event having come to a close on Sunday, the Niles Downtown Development Authority/Niles Main Street is gathering information on how businesses were impacted by the event. In the early process of gathering feedback, reports are looking like it was a successful event for businesses involved.

“We are still getting reports in from all of the restaurants. We asked them to track, as best they could, their sales,” said Justin Flagel, vice chair of the Niles DDA. “We are seeing anywhere from sales being up 33 percent, to up to numbers in the 70 percent and higher.”

Flagel also reported to the Niles City Council on Monday evening that visitors from surrounding communities, like South Bend and Granger, and as far away as Grand Rapids, had visited the city specifically for the event.

For Niles DDA Director of Marketing and Administration Lisa Croteau, she said the feedback she had gotten was very positive.

The Niles Restaurant Week was a collaborative effort between the Niles DDA, the Greater Niles Chamber of Commerce and the participating restaurants. Now, those behind the event are looking to make Restaurant Week a recurring promotion, aiming to host it twice a year.

“We are looking to do another in the fall,” Croteau said.

Linda Skwarcan, general manager at Veni’s Sweets Shop, located at 228 E. Main St. in Niles, said she saw an increase in customers over the week.

“I know we had some first-time people,” Skwarcan said. “We had people in that had heard about Niles Restaurant Week and came here especially for that reason.”

She said the shop would “definitely” participate again, should there be more events.

Iron Shoe Distillery, located at 3 N. Third St. in Niles, had a post on its Facebook page thanking its customers and staff for the busy week.

“It was amazing to see so many of you out and about downtown Niles, supporting local business,” the post said. “If you haven’t heard, the entire month of March has been declared ‘Restaurant Month’ in Berrien County. So, get out there and eat some more delicious food.”

Brew Ha Ha, located at 920 Broadway St. in Niles, had a social media post on Saturday thanking supporters from throughout the week.

“You came out in spades and showed us love,” the post said.

Both Flagel and Croteau said the Niles DDA was looking into ways to support other industries with similar events as well, in the future.