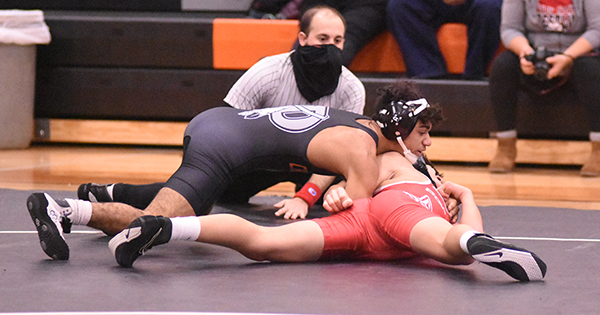 Dowagiac’s Jordan Simpson picked up career win No. 98 as the Chieftains went 2-1 on the day. (Leader photo/SCOTT NOVAK)

DOWAGIAC – With the start of the state tournament less than two weeks away, area wrestling teams are getting in as many matches as possible to prepare for the postseason.

Dowagiac went 2-1 on Saturday at its quad, as the Chieftains defeated Watervliet 61-9 and Portage Central 63-17. Paw Paw defeated Dowagiac for the second time this season as it posted a 46-30 victory in the third round of the quad.

Edwardsburg swept a pair of matches on Saturday as the Eddies defeated Zeeland East 44-36 and Hopkins 60-16.

Among those going undefeated for the Chieftains was Jordan Simpson, who was 2-0 on the day, picking up wins No. 97 and No. 98. Two wins on Tuesday for the Dowagiac 112 pounder will give him 100 for his career.

Dowagiac coach Colin Burandt said his team is improving, but still has plenty of work to do before the Chieftains host the Division 3 team districts on Thursday, March 18, and travel to Constantine for the individual districts on Saturday, March 20.

The Chieftains will take on Buchanan in the first round of team districts.

“First and foremost, we need to stay healthy and get a few guys down to a certain weight,” he said. “We need to keep trying to figure out how to stay off our backs. Those are the three biggest things.”

Edwardsburg had a slew of undefeated wrestlers on Saturday.

The Eddies will host the Division 2 team district on March 18. Edwardsburg will face Wolverine Conference foe Sturgis in the opening round. Niles will take on former SMAC foe Coldwater in the other semifinal.