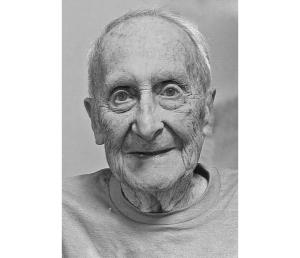 He was born on Aug. 12, 1917, in Oakland, Illinois, to James and Emma (Ward) Mullis. Emma later remarried Dorsey Bayes, who together raised Melvin.

Melvin graduated from the University of Illinois with a bachelor’s degree. Early in his career, Melvin worked at the secret nuclear development site, “Oak Ridge” (Tennessee), during World War II, developing enriched uranium. Later, Melvin was employed as a ceramic engineer for 20 years, before retiring in 1970.

In his free time, Melvin enjoyed fishing, and he was an avid collector of coins, cameras, and beer cans. He loved to tinker and make clocks. He was also known for his beer-making and wine-making, especially his cherry wine. Melvin also obtained a pilot’s license.

No services will be held at this time. Melvin’s ashes will be interred next to his wife in Wilson Cemetery in Newark, Ohio. Palmer Funeral Home—Hickey Chapel, South Bend, is assisting the family with arrangements.

Contributions in memory of Melvin may be donated to Heart to Heart Hospice, 620 W. Edison Road, Suite 122, Mishawaka, IN 46545.

Online condolences may be left for the family at palmerfuneralhomes.com.

Leon Mitchell, 84, of Niles, passed away Sunday, March 7, 2021, at his home. Arrangements are pending and entrusted to... read more