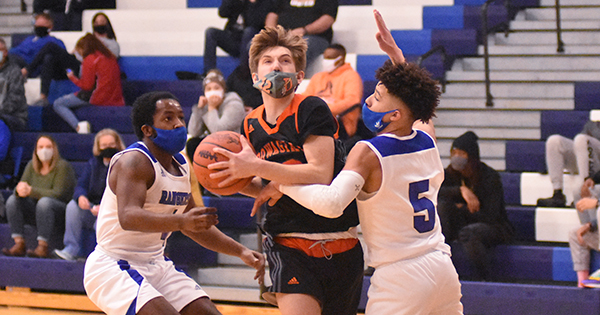 Henry Weller drives to the basket for two of his game-high 27 points as Dowagiac defeated Cassopolis 55-45. (Leader photo/SCOTT NOVAK)

The Chieftains poured in 21 first-quarter points en route to a 55-45 non-conference boys basketball victory over the Rangers. For Dowagiac, it was its third win of the season, while for the Rangers, it was only the second loss of the year.

“It was a tough game tonight,” said Dowagiac coach Danum Hunt. “It looked like for a moment that we were going to be able to run away with it. But the Rangers are tough, they are resilient, and they hung in there and made us play some of our better basketball tonight.”

Dowagiac used a combination of shooting, energy and effort in the opening quarter against Cassopolis. While the Chieftains were scoring at will on the offensive end, the defensive effort allowed Dowagiac to take a 21-8 lead into the second quarter.

The Chieftains (3-7) went cold in the second quarter, while the Rangers (5-2) got hot. The result was Cassopolis outscoring Dowagiac 14-10 to cut the Chieftains’ advantage to 31-22 at halftime.

The two teams played pretty evenly in the second half. The Rangers made a late fourth-quarter run at the Chieftains, who were able to make enough free throws down the stretch to hold off Cassopolis.

“Every night for us is a challenge, especially playing in the Wolverine [Conference],” Hunt said. “In the Wolverine, you need to how to play late in the game, whether you are up or down or it is close. I think that experience helped us tonight.”

Henry Weller, despite first-half foul trouble, scored a game-high 27 points to lead the Chieftains. Weller entered the game as southwest Michigan’s top scorer with an average of 18.1 points per game.

Host Brandywine remained undefeated in the BCS Athletic Conference Red Division as he held off a challenge from Comstock Friday night.

Kyle Mortimore had 11 points to pace Comstock, which dropped to 8-2 overall and 1-2 in the Red Division.

Visiting Three Rivers slowly pulled away from Niles as the evening wore on Friday night.

Isaiah Moore had a game-high 18 points for the Wildcats.

DOWAGIAC — The Dowagiac wrestling team continues to prepare for the upcoming state tournament, which begins a week from Wednesday... read more