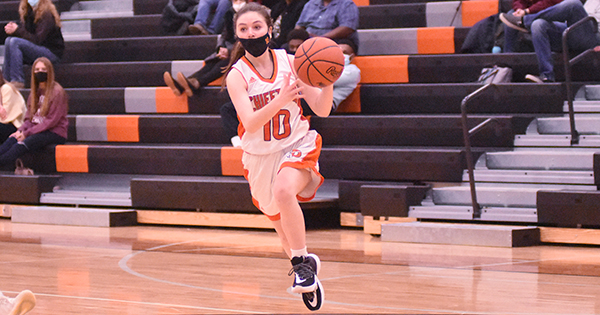 Erin Beck and the Dowagiac girls basketball team picked up its first win of the season with a 45-39 victory over Berrien Springs Friday night. (Leader file photo)

DOWAGIAC — The Dowagiac girls basketball team rallied from an 18-15 halftime deficit to defeat visiting Berrien Springs for its first win of the 2020-21 season.

The Chieftains outscored the Shamrocks 21-9 in the third quarter to take a 36-27 lead, which they turned into a 45-39 non-conference victory Friday night.

“Tonight, we were able to get some offense going,” said Dowagiac Coach Jason Turner. “We were able to get the ball to the post tonight and let our post players work. We brought up some JV players tonight that got us some good minutes off the bench. It was an all-around good game for our team. We can still do better on the defensive end of the ball, but the second half was much better defensively and turned into some offense for us.”

Berrien Springs (0-7) led 11-8 after one quarter and 18-15 at halftime. After its big third quarter, Dowagiac (1-9) edged the Shamrocks 9-8 in the scoring column to earn the victory and snap its nine-game losing streak to start the season.

Alanah Smith scored a game-high 16 points to lead the Chieftains, who also got seven points from Maggie Weller, who was moved up from the JV. Allie Conner added five points.

The Bucks (8-0) led 49-5 at halftime and then pitched another shutout in the third quarter, which allowed them to take a 58-5 advantage into the final eight minutes. The entire second half was played under a running clock.

Nadia Collins had four points for New Buffalo, which drops to 7-2 on the season.

On Thursday night, the Bucks blew out visiting Howardsville Christian 62-12.

Buchanan led 16-0 after one quarter and 35-5 at halftime. The Bucks outscored Howardsville Christian 27-7 in the second half.

Carson had a game-high 22 points for the Bucks. Austin finished with nine and Alea Fisher eight.

Injuries and illness are starting to catch up with the Niles girls basketball team.

Three Rivers (7-2) got off to a quick start, pouring in 21 points in each of the first two quarters, while holding Niles to 20 points in the opening half.

Things did not get much better in the second half for the Vikings, who were outscored 27-19.