Officers Ronald Richmond and Nolan Kahne joined the department last week and are hard at work learning the ropes.

A St. Joseph native, Kahne comes to Dowagiac after spending four years with the Cassopolis Police Department, whereas Dowagiac is the first professional stop for Richmond, who hails from South Haven. Both officers are excited to join the Dowagiac community. 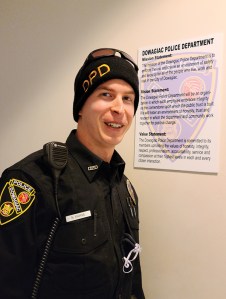 “It’s been the greatest thing for me,” Kahne said. “The officers are really cool. The trainers are really good, and everyone has a team mentality. We have each other’s backs.”

“It’s been amazing,” Richmond said. “I think I’m getting very good training. Everyone has been helpful.”

Richmond and Kahne look forward to a future serving Dowagiac and want community members to know what they are all about.

“I am someone who is driven and really cares about people,” Richmond said. “I strive to be the change I want to see. If kids don’t like the police, inspiring those kids to become a police officer would be my greatest accomplishment.”

“I’m a pretty mellow guy,” Kahne said. “You can expect me to be even-keeled. I like people but my most important objective is the task at hand. I’m very big on fairness and objectivity, and I love the U.S. Constitution. I take my oath very seriously and strive to ensure peoples’ rights aren’t violated.”

Kahne has wanted to be a police officer ever since he was a child. He  attended Southwestern Michigan College before moving on to Grand Valley State University’s police academy.

When he is not working, Kahne works on his house and enjoys fishing and spending time with his friend group from high school.

Public safety was not on Richmond’s radar growing up. With a family full of nurses, Richmond followed that path and realized that nursing was not for him.

“My brother James inspired me to be a police officer,” Richmond said. “He said if he would have done things differently, he would have been an officer. He encouraged me to take that step. I also played football at South Haven and a lot of my football coaches were police officers. I liked how they carried themselves and the respect they had in the community. I strive for that.” 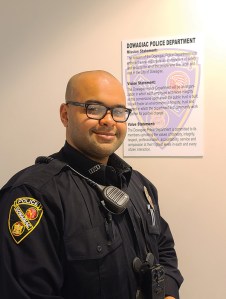 After realizing nursing was not his calling, Richmond attended and graduated from Delta College in University Center, Michigan.

“There is a lot of training that goes into it,” Richmond said. “I learned so much during my time there. The amount of information they give you is impressive.”

Being outdoors and working out with his cousin are two ways Richmond enjoys spending his free time.

“I love to be outside,” he said. “I love skiing, playing basketball and hiking. I will be trying out fishing this summer for the first time. I’m always looking for new things and challenges.”

Director of Public Safety Steve Grinnewald is happy to have them aboard. The duo is currently undergoing the department’s field training officer process to learn systems and procedures.

“Every officer has to come in and go through what’s called a FTO which is a field training officer process,” Grinnewald said. “That can last anywhere from 12 weeks to 20 weeks. It just depends on what their experience level coming in is. Some people are a little quicker to understand. It depends on each person. In that 12 to 20 weeks, there’s so much information thrown at them, but we try to work them through it and they do a good job.”

According to Grinnewald, quality officers are hard to come by these days.

“The last few years, it’s just been terrible,” he said. “There just aren’t any applicants. When we would advertise a position in the past, we’d get anywhere from 12 to 20 applications. We’re lucky to get five or six a year, now. There’s just not as many people going into this line of work. There is obviously some scrutiny that goes on with this line of work that people just don’t want to be involved in. When we do get applicants, we always try to take a stand that we are not going to lower our standards. We still try to look for people with a clean background, which is getting more and more difficult to do as well.”

Grinnewald said it’s not uncommon for the police department to be a stepping stone position for officers looking to move on to bigger departments. With officers like Kahne and Richmond, who are from area communities, Grinnewald aims to build a team of officers eager to plant roots in the community for the long term.

“What we’re looking for is people who want to be officers in Dowagiac or a town like Dowagiac,” he said. “We like those individuals that want to be here for the next 25 years. That’s what you’re searching for, and I think we’ve done a pretty good job of that. We’re a little picky, we want people that are gonna fit in with our community. We don’t want just a uniform. We want somebody that’s going to want to be here, loves Dowagiac and wants to do the best for this community, for our citizens.”