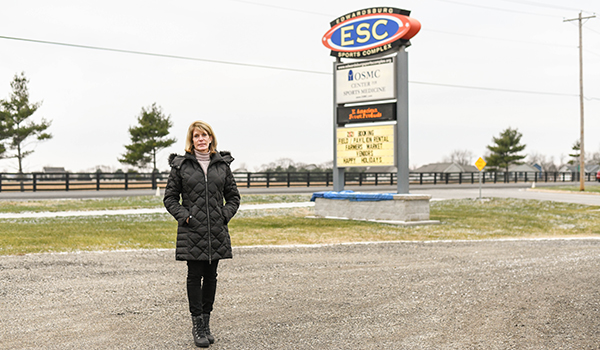 Despite a rollercoaster ride, work on the Edwardsburg Sports Complex has continued throughout the COVID-19 pandemic.

Even though the ESC board was forced to postpone or cancel events, and even shut the complex down in August due to insurance issues that arose from the pandemic, plenty of projects were continued, and some completed in 2020.

On Aug. 19, the board announced that the Edwardsburg Sports Complex would suspend all activities until further notice. That was because board members felt there was no coverage if someone contracted COVID-19 while being at the facility.

Even though the Edwardsburg cross country teams were unable to host their meets on the complex’s trails, and the fall soccer league had to be canceled, work on the various fields and projects throughout the complex went on, according to Patty and Ed Patzer.

The state of Michigan began setting guidelines as to what could be open and how many people would be allowed to gather for events just as the complex was set to open for the spring.

“It started just when soccer and lacrosse were beginning to get scheduled,” Patty Patzer said. “The whole spring season had to be canceled.”

“We would have exceeded all of those outside gathering guidelines,” Ed Patzer added. “She [Gov. Gretchen Whitmer] just said outdoor gatherings. We are 102 acres, and we are spread out, but there never were any guidelines about that. No one could tell us if someone would come and shut us down, and we did not want that kind of publicity.”

Even though golf courses were allowed to open up with guidelines pertaining to social distancing, the ESC board was unsure if that included the sports complex. The board was prepared to reopen in the fall under the latest guidelines when insurance became an issue.

According to the Patzers, one of the events that was allowed to happen over the summer months was the inaugural Farmer’s Market, which, despite the pandemic, was a success.

“Markets were able to run, and we had a garage sale the second weekend of August,” Patty Patzer said. “It was right before the garage sale we realized the liability coverage for small business and nonprofits just was not there. There was no legislation for it. Our board of directors was concerned too.”

The complex was able to host a pair of events over the summer. The Beasley National Soccer School went on as planned in July, and “A Night Under The Stars” outdoor prom was hosted on Aug. 1.

The complex was also able to host fall baseball practice.

Summers are usually a bit slower than the spring and fall seasons, according to the Patzers, but losing both of their busy seasons was not in the plans.

Even though the pandemic meant delays, work at the complex continued throughout the year. Because they were able to keep pushing forward, 10 multi-use fields were fully developed, the fields of the baseball quad are now ready for play, and a basketball/pickleball court was built.

The complex also expanded its walking/cross country trail, with hopes that in the spring, the state will be reopened for people to take advantage of the complex.

“From a construction standpoint, the board gave us the green light to continue that,” Ed said. “Although there was some hesitancy there. I pushed hard for that because we had to do something. Our biggest challenge is to get past the construction phase of the complex so that we can be operational and run events.”

An unforeseen fallout from the pandemic was that state orders did not allow for construction work to be done for a period of time. That forced the complex to change its plans.

“Our foundation contractor for the concession stand for baseball was not allowed to come into Michigan,” Ed said. “Because of that, he could not work initially.  [Gov. Whitmer] shut down construction in Michigan. He did not want to risk coming in. Because of that, the foundation got put in so late, I decided to cancel the project for last summer. … All the contractors were behind, so I was not able to get the electricians and the plumbers out there. Now, with wood and steel prices, we are probably going to have an increase of $50,000 or $60,000 in the cost of that concession building.”

One of the good things that has come out of the coronavirus pandemic is the use of the complex’s walking trails. Because people have been allowed to get outside and hike or go on walks, the trail has seen an uptick in use.

Moving forward, the complex will continue its work on the baseball fields, as well as the concession stand construction, fencing on the rest of the fields and building a press box.

“We will be ready for the spring,” Patty Patzer said.

Nestled next to the Dowagiac Creek is a quaint space, a space where folks can escape the hustle and bustle... read more