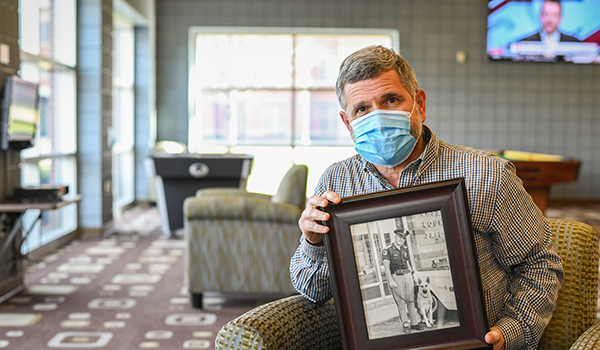 Children, parents and the entire Dowagiac community were enjoying the splendors summer brought with it. But this summer was different. Everyone made sure to be home by dusk. Doors were locked and blinds were closed.

Someone — or something — had been making its rounds in town. Families gathered around the radio in hopes of learning its whereabouts, while others braved the outdoors looking for signs of it.

Dowagiac had found itself within the grasp of the Dewey Lake Monster, a grip that has ceased to relent more than 50 years later.

Sixty-six years later, Dowagiac residents were once again holed up in their homes, hiding from a different monster — the COVID-19 virus.

Like so many in the year 2020, Marcus Roll, manager of theater operations and applied performing arts at Southwestern Michigan College in Dowagiac, had run into a problem — keeping life moving in spite of restrictions put in place to slow the spread of the virus raging throughout the globe. In Roll’s case, the tasks at hand were to find a way to keep his performing arts students active during the pandemic, and to creatively engage the community in a way that complied with pandemic restrictions.

According to Roll, the school’s spring production of “Grease” was canceled last year, and an in-person fall production this year was not realistic.

That is when Marcus was approached by SMC assistant director of campus life Branden Pompey with an idea for a radio show.

“It was this weird happenstance,” Pompey said. “I’m a fan of old-timey creature features from the ‘40s and ‘50s. Radio shows always had that ‘Twilight Zone’ sort of feel to them. You’re able to create the picture in your mind because you’re listening to everything going on.”

A 2005 graduate of Dowagiac Union High School, Pompey earned his associate’s degree in theater at SMC and his bachelor’s in theater at Grand Valley State University. He knew his way around a stage, having both directed and acted in a number of projects at the Beckwith Theatre Company.

“When I went to school, I had the dream of screenwriting,” Pompey said. “I saw this as an opportunity to flex my creative muscles and tap into the artistic side of me. I jumped at the opportunity to do that.”

“Brandon and I had been looking for a way to collaborate, so this has been perfect,” Roll said. “He wrote an original script, and I got to produce and edit, so we’re playing to both of our strengths.”

Roll and Pompey then pitched the idea to the school administration, which liked the idea of a virtual production.

“They wanted to make it more personal for the community,” Pompey said. “Centering it around something near and dear to people in Dowagiac. We decided to focus on the Dewey Lake Monster.”

The Dewey Lake Monster is a legendary Sasquatch-like creature first reported in the mid-1960s after sightings near Dewey Lake in Dowagiac.

Their proposed show, titled “Terror on Dewey Lake,” would center around a group of students unraveling the mystery of the disappearance of a local town hero, with the Dewey Lake monster as the prime suspect.

Standing a towering 9 feet tall, weighing in at roughly 500 pounds of pure muscle and featuring bright, glowing eyes, the Dewey Lake Monster’s physical appearance was enough to make even the toughest witness tremble. While sightings of the mythical creature have diminished over the years, the legend of the Dewey Lake Monster resonates with greater Dowagiac to this day.

With approval from the higher-ups, production on “Terror on Dewey Lake” could begin in earnest.

While “Terror on Dewey Lake” might spin a tale about a horrifying monster, this is a different story. This is the story of how two thespians set out to save the school’s theater season, and the community that supported them every step of the way.

Pompey and Roll had just received the greenlight for their 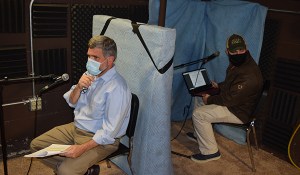 radio show, but they could not afford to relish the moment.

They had roughly seven weeks to produce the radio show before its Oct. 30 release. Pompey spent the first few weeks writing page after page of script, working through the types of sound effects and transitions needed and conjuring up commercials and musical numbers.

The pair decided to incorporate local businesses into the radio show’s commercials, which featured advertisements for Baker’s Rhapsody, Underwood Shoes and the Beckwith Theatre Company — all in the name of creating a “well-rounded Dowagiac experience.”

“That was pretty cool,” said Baker’s Rhapsody owner Jordan Anderson. “They decided to make it hyper-local and include local businesses and landmarks. I just thought it was a clever idea to do a radio show amid the pandemic.”

Once the script was in a good place, the duo began hosting auditions for roles. The auditions received a large turnout, including performing arts students, regular students, school faculty and even SMC alumni.

The cast would feature a direct connection to the Dewey Lake Monster myth.

SMC Director of Security and Conduct Lyndon Parrish auditioned for the role of Sheriff Leonard. Parrish spent 27 years with the Cass County Sheriff’s Department. His father, Paul Parrish, was a sergeant with the sheriff’s department in 1964 when the first sightings of the Dewey Lake Monster took place, and went on to be the sheriff for many years.

“[Branden] thought it would be interesting for me to play a role,” Lyndon Parrish said. “I was a little hesitant. He convinced me that I wouldn’t be in front of anyone, and I wouldn’t have to memorize the script. I was really impressed with the final product. Branden did a great job with the script. It sounded like an old-timey radio show.”

Lyndon Parrish was born in 1964, the same year the Dewey Lake Monster was sighted in the Dowagiac area. While he was not around to experience it, his father filled him in on the event that gripped the community.

“I talked to my dad about it,” Lyndon said. “Back in the ‘90s, there was a TV program about the case. It was a crazy few weeks where a lot of folks got really excited about it. They had some castings of footprints back in the day.”

Pompey said having a crew member with a tie to the Dewey Lake Monster added another layer of interest to the production.

“To work with someone who had a direct connection to the myth was exciting,” Pompey said. “He had a blast participating.”

In addition to Parrish, Pompey and Roll cast 24 roles for the production. At long last, rehearsals could begin.

The radio show format allowed Roll and Pompey to keep both performers and spectators safe from the large casts and crowds that typically accompany theater productions. Recordings and rehearsals were able to be done via Zoom.

“With a radio show, it’s all dialogue,” Roll said. “With a play, we would have to rehearse in person, which calls for a lot of movement on the stage. We would be rehearsing with props, too. With the radio show, if we need to rehearse in person, we can safely do that in the theater by spreading out. We don’t have to move. The voice actors will be able to look at the script the entire time, instead of memorizing lines like you would in a play.”

One of the biggest issues the production ran into was losing students to quarantining after being exposed to a positive COVID-19 test. But because of the nature of the production, the show was able to go on.

The rustling of leaves underneath characters’ feet, the chirping of birds, water flowing down the stream and many more sound effects were created by Roll, who also coordinated the musical numbers.

“[Roll] was the workhorse of this show,” Pompey said. “A number of instrumental pieces and sound effects were made by Marcus.”

Once edited, Roll sent the final product to the school’s marketing department, which began creating posters and advertisements for the show.

When Oct. 30 finally rolled around, the school uploaded “Terror on Dewey Lake” to YouTube for all the world to see — err, listen.

After weeks of editing scripts, evaluating auditions, creating sound effects and putting together musical numbers, Pompey and Roll had finished their first production together. The radio show has received hundreds of views on YouTube since Oct. 30.

“It’s phenomenal to me,” Pompey said. “It’s the first thing I’ve written that has been fully produced. To think that so many people tuned in means a lot to me. Creatively, you approach production with the idea in mind, but figuring out how to make it work cohesively was challenging. Having a partner like Marcus helped. We were able to troubleshoot with the script. I wrote the script, but it was a collaborative effort. I felt by the end of it, it was all of us making the show together.”

While the theater department is eager to return to traditional productions, Pompey said he had some ideas in mind if the school wanted to produce another radio show.

“We have had talks of what we’d want to do going forward,” he said. “I made it clear that if I have the opportunity to write scripts and get them produced, I would jump at the opportunity. I have some ideas in my head. Halloween, film noir, maybe western. I feel like I have creative momentum behind me. One of the great things about working for SMC is that the environment encouraged me to experiment and try new things. I’m grateful to work where I’m working. It allows me to flex creative muscle.”

Is the Dewey Lake Monster real? Time has moved forward since the first sightings but the myth continues to persist. There is no telling what could be hiding inside the dense thickets surrounding Dewey Lake. Perhaps Pompey and Roll will have material for a sequel if the Dewey Lake Monster decides to trudge through Dowagiac woodlands again.