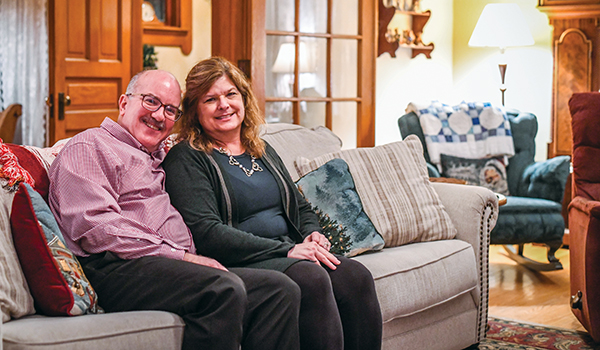 On New Year’s Eve 2017, Liz Momany, of Dowagiac, stood in the middle of Times Square in New York, squished into a crowd of cheering, enthusiastic fellow tourists. Like everyone else, Liz was waiting for the clock to strike midnight and take her into a new year full of possibilities.

When the time came, she watched in awe as the ball dropped, and confetti of all different colors rained over her. Somewhere in the sea of colors was a slip of confetti she had written her new year’s wish on earlier in the evening — to find true love.

In less than six months, her dream would come true.

In August 2019, Liz, 60, married Chris Momany, 59, the current pastor at First United Methodist Church in Dowagiac. Though they dated a little more than a year before their marriage, they had known each other since the 1970s. Chris and Liz were high school sweethearts who had been separated for 39 years before they reunited in May 2018.

Though their path to love and marriage was a long and winding one, the couple said it has felt like life “coming full circle.”

These days, the couple sits at their dining room table looking through dozens of sepia-toned memories — Polaroids and old photos discolored and fraying at the corners — depicting their high school lives together. The couple looks different now than they did back then. Liz no longer dons the bright, bold plaids of the late 1970s, and Chris is missing his 17-year-old head full of sweeping hair. Though fine lines now crinkle toward the edges of their eyes, the couple can still be recognized by the smiles that match the photos of their younger selves. 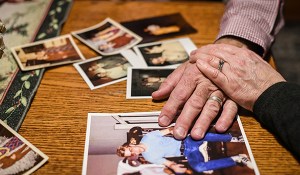 “This one was from one of our high school dances,” Chris said, pointing to a photo of himself and Liz decorated with a corsage and boutonniere. He chuckles to himself as he flips to another snapshot of the couple sitting in rocking chairs, looking exhausted.

“That was a rock-a-thon where you rock for 24 hours and raise money for missions,” he said. “We were probably about 22 hours in when this photo was taken.”

“There are a lot of memories on this table,” Liz said, delicately picking up one of the photos to read the date on the back. It is from 1978. “There are some good ones here.”

Liz Skelley and Chris Momany met in the summer of 1977 at band camp. At the time, Liz, a junior, claims she “atrociously flirted” with Chris, a sophomore at the time. They were both drummers in the St. Joseph High School marching band. Despite her flirting over the summer, it took until September before Chris finally asked Liz to the homecoming dance.

“We were kind of talking back and forth, and I don’t know how many times I walked her home before I got the nerve to ask her out,” Chris said.

“I always made sure we took the long way home,” Liz recalled with a knowing smile. “When he finally asked me out, I said, ‘sure, why not?’”

Now sitting on a comfy couch in his Dowagiac home, Chris laughed.

“You know, I couldn’t tell if she was really excited or not,” he said.

After that, Chris and Liz became inseparable. It was on one of their long walks — on the corner of Highland Street — that Chris told Liz he loved her for the first time.

“I said it first both times,” Chris said. “She is really the person who really taught me to find confidence in myself.”

“[Chris] was my first true love,” Liz said. “It was heavy, more than a high school fling.”

As a couple, they formed some of their favorite memories attending youth group together. Chris even credits their time together as inspiring him to become a pastor, saying Liz was the first person to encourage him to explore his talents in the church.

The couple dated for two years before Liz graduated high school, and the couple drifted apart.

She obtained a background in nursing before moving to Indiana and becoming a consultant for different hospitals. She married and mothered three daughters before divorcing her first husband.

Once Chris graduated high school, he pursued theology and spent 23 years as a chaplain and part-time professor at Adrian College. He spent nearly 27 years with his first wife, Kim, before she died in 2016 following a battle with cancer. With Kim, Chris fathered one son.

Time kept moving, and Chris and Liz did not see each other again for nearly 39 years. Little did they know, it would take a chance encounter to reunite them.

FALLING IN LOVE ALL OVER AGAIN

In 2017, Liz moved back to southwest Michigan to care for her ailing mother. Around Christmas 2017, Liz took her mother out to eat in St. Joseph and — much to Liz’s surprise — ran into Chris’ mother, Carol Momany. The three women had a chat before going about their respective days, and it did not take long before Carol was on the phone with Chris letting him know that his first love was back in town.

“After all these years, my mom still thought Liz Skelley was the top of the heap,” Chris said. “[Our parents] remembered us as young people, and they really felt good about the other person.”

In February 2018, Chris, who was living in Adrian, Michigan, reached out to Liz via Facebook to express concerns and prayers for her mother’s health. In May of that year, he finally asked her out for a cup of coffee.

Ahead of the date, Liz was determined not to be nervous, having convinced herself the meeting was nothing more than catching up with an old friend. However, all it took was Chris walking in to that coffee shop for everything to change.

“I spilled the coffee in front of me because my hands were shaking so hard,” Liz recalled with a laugh. “Once we laid eyes on each other again, there was a spark that ignited immediately.”

The feeling was mutual.

“I thought, ‘Wow. Liz is the same fantastic person she always was,’” Chris said of seeing her again. “Even if I had never met her before in my life, I would still have thought she was a fantastic person.”

From that date on, the couple knew they were serious about each other. Due to the distance, they would talk on the phone each night for hours, often until 2 a.m.

“We were on the phone for I think 86 hours in June,” Liz said. “We got to know each other really well.”

On Aug. 12, 2018, the couple took a post-dinner walk along the beach in St. Joseph when Chris dropped to his knees, fumbled in his pockets and produced a ring.

“He told me he was going to ask me to marry him, but I was still shocked,” Liz said.

Things continued to move quickly for the Momanys. Chris was assigned to lead Dowagiac’s First United Methodist, and the couple found a home just outside of downtown to settle in once they were married. Nearly one year after Chris proposed, Liz was walking down the aisle in a white dress to him. Following the ceremony, the couple recreated a photo from their high school prom.

“It was right,” Chris said. “When you are young, you are nervous about everything, but I wasn’t. I knew I was where I was supposed to be. I knew it was going to be a fun day, and it was.”

“It was a simple wedding, but we were very much in love,” Liz added as she shot a smile over to her husband. “We still are.”

Now that the couple has been married and settled for more than a year, they look forward to continuing their life together, being a part of the Dowagiac community and traveling through mission trips.

“We are such best friends. We can spend all day every day together and be perfectly happy,” Chris said.

Despite the four-decade journey she and Chris have been on, Liz said she could not be happier with the way her Times Square wish was fulfilled.

“There’s a part of me that never, ever stopped loving [Chris],” she said. “That’s the way it’s supposed to be with your first love.”

In Cincinnati, Ohio, hours from her home in Michigan, a nurse stands by a bedside, her iPhone in one hand,... read more