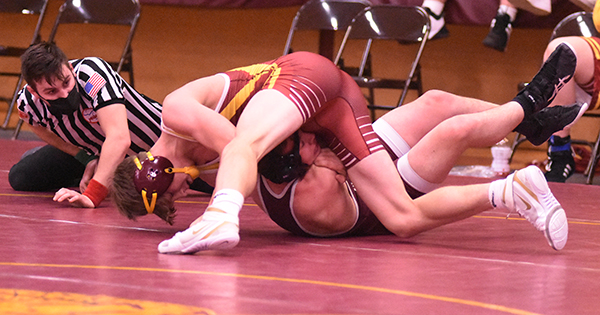 NILES — After sweeping Berrien Springs and Colon in the first two rounds of the Brandywine Quad on Wednesday night, the arch rival Bobcats and Bucks turned their sights on each other in a key BCS Conference.

Despite both teams having to give up points due to forfeits, the match was high-energy and intense. Buchanan had a chance to get the win over Brandywine, but the Bobcats rallied late, earned a few key victories, and came away with a 45-36 victory.

Brandywine improved to 12-6 overall and 3-1 in BCS matches with three wins on Wednesday.

Trailing 30-9 after Buchanan’s win at 152 pounds, a pin by Jackson Starnes over Gage Hoskins in 1:22, the Bobcats went on a roll, winning four consecutive matches, all by pins, to take a 33-30 lead on the Bucks with three bouts remaining.

Brandywine’s Hunter Heath, who earlier this year picked up his 150th career victory, got the pin parade started when he stuck the Bucks’ Andrew Ruth in 1:57 at 160 pounds. Gavin Schoff followed that up with a pin of Brayden Sebasty in 1:03 at 171 pounds before Ivory McCullough pinned Alex Weinberg in 21 seconds at 189 pounds to move the Bobcats to within three points.

Philip McLaurin capped off the streak of pins at 215 pounds with his in over Dean Roberts in 45 seconds.

Buchanan’s Mason Colglazier stopped the bleeding with Ben McKee’s pin in 3:39 at 285 pounds, which gave the Bucks the lead back at 36-33.

Unfortunately for Buchanan, it had to forfeit the final two weight classes, which allowed the Bobcats to pull out the win.

“I am pleased with our young team,” said veteran Brandywine Coach Rex Pomranka. “We gave up some points, but I am happy with our young guys. We came out and fought hard, even in the matches that we lost. I had it being 39-39, and we would have lost on criteria [forfeits]. The 215 match was big. I told our upper weights we had to pin out, and they did it.”

Buchanan veteran Coach Andy Riggs, while not happy about the loss, said these are the types of nights his team needs to prepare for the state tournament, which begins in two weeks. He also gave credit to the Bobcats for doing what they needed to do for the win.

“You have to give it to up to Brandywine,” he said. “There were some key match-ups that didn’t go our way. We still wrestled hard and still did what we could do on a shortened season. I think it will be a lot of fun in a couple of weeks at team districts. No matter how it falls, it is going to be a lot of fun between us, Dowagiac [district host], Brandywine and Berrien.”

The Bobcats are back on the mat Saturday as they travel to Bronson for a quad. Wrestling is set to begin at 10 a.m.