For communities across the country, high school sports rivalries are powerful events. Friends from across town become bitter enemies, if only for a few hours. Shops and businesses sport school colors to show their allegiance. The school fight song echoing through the rafters feels even better than it usually does.

Separated by just 14 miles, the communities of Niles and Dowagiac have been long standing rivals in many aspects, most notably high school football. A series that dates back to 1896, the Vikings and the Chieftains played in their 103rd game against each other after a 15-year hiatus from 2005 to 2020. Dowagiac emerged victorious with a 20-0 win over the Vikings to tie the all-time series at 49 wins, 49 losses and five ties.

The win was special for second-year Dowagiac head coach Randy Brooks, who was a 16-year assistant at Dowagiac starting in 1989 and helped the 1990 Chieftains win the Class BB state championship. 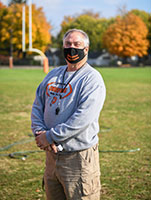 “I told them the first year I was coaching here, in 1989, we were 8-0 and Niles was 3-5, and they beat us,” Brooks said. “That’s the way it goes, you throw the records out the window. It’s a backyard ball. I think for the guys that used to play, it means a lot to them. From both sides, if you go to a basketball game, they’ll tell a story about the Niles-Dowagiac football game. It really means more to them than probably the players involved in the game this year, but it’s a cool thing. They should have been playing this game all along. It’s unfortunate that the rivalry got broken up.”

Dowagiac senior Wyatt Bailey was happy to earn a win and become part of the rivalry’s history.

“It feels pretty good because we could start it off after it stopped,” Bailey said. “We can start it off with a win and even up the series and then next year our team can win it, and we can be in the lead again.”

While the loss stung, Niles head coach Joe Sassano was glad his team was able to be part of a longstanding tradition.

“They need to understand that there’s a long line of guys that came way before them,” Sassano said. “It’s more than just them; there’s history. This was a great opportunity to kind of work on that history here a little bit and give them as much of a history lesson as we could.” 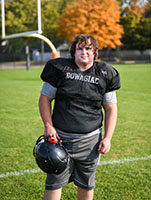 Due to the rivalry’s extended hiatus, there were players on both teams who were born after the last game and grew up without experiencing the rivalry. Sassano brought in guest speakers consisting of former players and coaches to help players understand what the rivalry is all about.

Niles assistant coach Paul DePoy played football for the Vikings from 2003-2006 and played against Dowagiac in 2005, the last game before the hiatus. As the only player or coach to participate in the rivalry from Niles, DePoy was fired up the week leading up to the game.

“It’s awesome,” DePoy said. “It’s an electric atmosphere no matter what. Even with a limited number of fans, just seeing these two teams play again was great. This is my 10th year coaching now, and I always talk to kids about Dowagiac. ‘You guys don’t know nothing. There’s five, 6,000 people in the stands.’ It really is something special.”

Given the unpredictability of the season’s prospects, Niles senior quarterback Chase Andres and freshman quarterback Talon Brawley were proud to represent their community on the football field.

“We’re excited to bring it back,” Andres said. “We’re moving the Wolverine Conference next year, so we’ll be able to continue it. It was one of the longest rivalries in the state of Michigan every year before they stopped, so I’m glad to be a part of it. As a senior, being able to get my senior year back and to bring back a rivalry the same year has been great.” 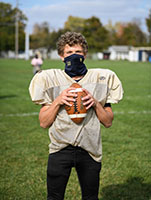 “We lost a few games, but it was a real special thing to play this year,” Brawley said. “We’re lucky. We could have had it taken away from us.”

Prominent area rivalries are not exclusive to the gridiron. They can be found elsewhere, including the hardwood. Josh Hood knows that better than most. Hood, assistant principal at Brandywine High School in Niles, has experienced his fair share of rivalry games against Niles and Buchanan, both as a Bobcats basketball player himself as well as coach of the girls basketball team.

Hood has coached the Bobcats for 12 years and has amassed 10 district titles, seven regional titles, two state final four appearances and eight conference championships. He understands how important the Brandywine-Buchanan rivalry is to both communities.

“You know these people,” Hood said. “The thing about small communities is that the high school is the epicenter of the community. We have a lot of pride for our communities. You never want to lose because you’ll hear about it from everyone. They’re only five miles away. The players become friends because they’ll play travel ball or see each other outside of sports. There are so many friendships built, and ultimately, the game comes down to bragging rights.” 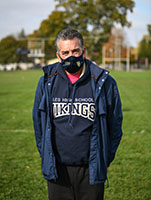 When the Buchanan Bucks enter the Bobcat Den, Brandywine students in the fan section are typically decked out head to toe in camouflage, ready to hunt the Bucks. Buchanan’s award-winning student section comes ready to yell, taunt, dance and sing across the court, determined to drown out the Bobcats’ growls.

On the court, a sea of maroon and gold blends with maroon and white as players who have known their opponents since childhood, having played youth leagues and travel ball with friends fewer than five miles away, battle it out for a win.

Rivalry games are also events where communities can join together in order to be a part of something bigger than themselves.

In the last decade, the Brandywine community has come together to raise more than $30,000 for the Brian Parker Foundation with its annual Cats for the Cure game.

Members of the basketball program sell T-shirts or accept donations, which assist the foundation in providing educational materials, research grants, monetary assistance and monetary support to those who have cancer.

“To be able to raise that kind of money for this foundation speaks volumes about our Brandywine community,” Hood said. “This foundation does so much for southwest Michigan, and this is our way of saying ‘thank you’ and helping them continue to do what they do. We are very grateful for the Parkers, and we hope to keep going strong for many years to come.

“We’ve been lucky,” Hood continued. “Buchanan has helped us out the past few years. It’s nice to see communities come together. You always want to win but at then end of the day, raising funds for something like this is big. I have a lot of respect for their coaches.”

Despite the white-hot intensity the games themselves may bring, Hood makes sure to approach each rivalry game like the other games on the schedule.

“For me and our staff, we prepare the same if the opponent is Buchanan or Comstock,” Hood said. “If you’re a good coach, you shouldn’t put more emphasis on one game over the others. The community loves it. You play in big crowds in a high intensity atmosphere. From a coaching standpoint, you take things game by game as if every game is a rivalry. People want us to hate Buchanan. We share film and talk basketball. I have nothing but respect for their program.”

From Niles-Dowagiac to Brandywine-Buchanan and beyond, rivalry games have a way of bringing out a level of school spirit that allows community members to come together as one, if even for a few days a year.

“That’s what makes it so special,” said Mike Morrison, Brandywine alum and Bobcat announcer, of Brandywine’s rivalry with Buchanan. “It’s a tradition that never dies. That’s the game that you talk about. We always circle it on our calendar. This is your time to represent your community, win or lose. It’s a great feeling.”