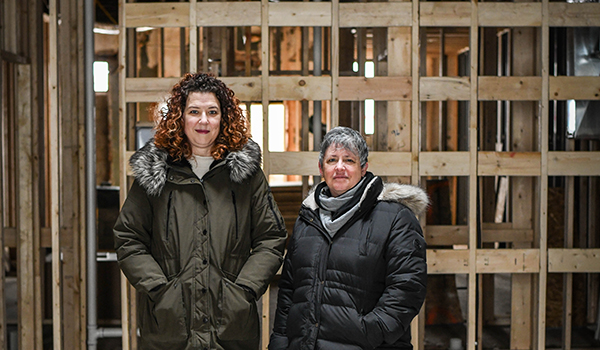 After more than 20 years in the Seattle area, Shannon Lyons, and wife, Cathy McBride, were ready for a change.

The consuming, long commutes on congested highways and roadways felt like stolen time after a while. The packed sidewalks throughout the city lost their wonder. The desire to live somewhere where the air was a bit more open and places were more accessible within minutes, not hours, grew more and more appealing. What if they could walk to the coffee shop, the dry cleaner, the library and pick up a baked good on the way back home within an hour or so?

Lyons and McBride were old enough to start thinking about their future retirement, but were not ready to do it just yet. Instead, they wanted a change of pace — to enjoy parts of their day again in between the bigger tasks.

Lyons remembered a place like that, and decided it was time to return to a familiar place and see how life could be again in Dowagiac.

“We just kind of got tired of the big city. We were kind of done,” Lyons said. “It was very crowded, very expensive, very hard to get around. We wanted to have a little simpler, less stressed way of living.”

Lyons is from Dowagiac, and her family still resides there. The roots already in place were a part of the draw to “come home” for Lyons. Moving back home and purchasing a house that would require tending to felt like a big commitment, however, as Lyons and McBride were used to traveling for work. 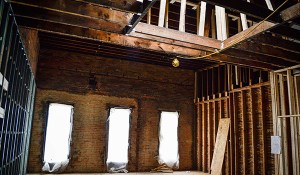 “The building we are living in now was for sale, and from a Seattle perspective, it was an incredibly reasonable price,” Lyons said. “We thought, ‘what if we renovated the building and made it work for us?’”

Moving away from Seattle and coming back to Dowagiac was a big change for Lyons and McBride. To purchase properties to manage and restore in the heart of downtown, and bring high-end apartments and short-term rentals to the area, has been a different kind of venture for the two of them.

McBride said they fell into looking at the properties in Dowagiac on a whim.

“Shannon was traveling, and her boss was looking at houses,” McBride said. “She was like, ‘I’m going to look at something too.’”

McBride, a software engineer, was able to begin working remotely a year or so before COVID-19 made that shift for many individuals. The transition gave her and Lyons the ability to travel, look at the building and begin renovations.

Exploring the building in downtown Dowagiac’s N. Front Street corridor, Lyons and McBride saw the way to make their way in Dowagiac. While apartments are in no lack of supply in Dowagiac, higher-end apartments and short-term rentals seemed to be to Lyons. 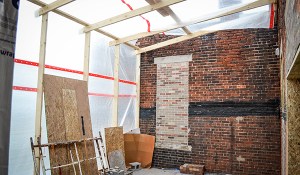 The couple experienced the appeal of Dowagiac and knew others would find it appealing as well.

They saw the potential, and invested in the building they now call home: 115 S. Front St.

City leaders like Vickie Phillipson, program director for the Greater Dowagiac Chamber of Commerce and Downtown Development Authority, are also pleased with what Lyons and McBride have done in downtown.

“Reinvestment in the community and in our central business district is key to the continued development of Dowagiac,” Phillipson said. “In recent years, as downtown property owners have relocated, reached retirement age or have passed away, several storefronts have changed ownership. In some cases, these are properties that were held by an individual or one family for multiple decades.”

Lyons and McBride spent time talking with family and friends before the building was done and ready to move into. By the time it was finished, every space had a plan. Lyons and McBride could move into their apartment knowing the storefronts on the first floor would have eager tenants waiting to move in.

They were also able to see what other business owners had done to convert their buildings in the downtown area, like what Jordan Anderson, owner of The Baker’s Rhapsody, and husband Hector Rivas did in renovating their building just down the block.

“They were nice enough when we were looking at our building to allow us to see what their apartments looked like,” Lyons said of the living space above the bakery. 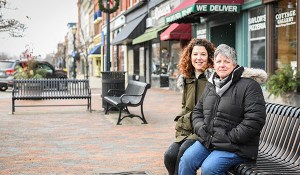 “We got to see what was behind the scenes and see that it can be done,” McBride added.

Lyons spent quite a bit of time in Seattle after graduating from Dowagiac Union Senior High School in the late 1980s.

Her father, Don Lyons, ran Lyons Industries beginning in the 1970s. The last name continues to be familiar to those in Dowagiac, as Lyons Industries continues to be run by the Lyons family. Don was first elected mayor of Dowagiac in 1997, and has held the seat each election since. Don and wife, Joan, have run the Heddon Museum in Dowagiac since 1996. The museum showcases the history and contributions of the Heddon family to the city, and to the sport of fishing. Returning to Dowagiac was a homecoming for Shannon.

Prior to her and McBride’s permanent return, Shannon Lyons attended a high school reunion with her former classmates. One of the concerns many had surrounding the event was where to stay. Neighboring communities of South Bend, Niles and St. Joseph had hotels and Airbnb-type rentals available, but not as many were available in Dowagiac.

It showed Lyons another market she and her wife could explore. With a second apartment to fill in the building, Lyons and McBride settled on a short-term rental model for the space.

“There really isn’t a place to stay in town,” Lyons said. “There’s a lot of lake places in the summer.”

McBride pointed out that professionals moving to the area, like themselves, may have a harder time finding a place to put down roots without a temporary living situation arranged.

“We have a college, factories, a hospital — we have professionals coming into the community,” McBride said. “They need somewhere to stay until they can find a house.”

Now, with two more buildings under contract, including the Harvey’s Shop building Lyons and McBride intend to renovate into more high-end apartments with commercial space on the first floor, they are happy and settling into downtown Dowagiac. They want to make the city more accessible to professionals building their career in the area, without having to commute from a home nearly an hour away.

With the pandemic firmly cemented in the minds of city dwelling professionals, Lyons believes there will be even more people seeking to do what she and McBride have set out to do.

“It’s not easy, but it’s absolutely doable,” Lyons said. “I think [the pandemic] is going to hasten people leaving cities and coming to smaller cities where their money goes a little further. Places they can walk to the coffee shop, the dry cleaner’s, the library, the train station and go to an outdoor concert. You really have everything accessible to you and not at an hour’s drive in traffic.”

In the case of the Harvey Shop building, at 143 S. Front St., Lyons said it was empty for a long time, making it an extensive renovation that will take some time. The building is a large-scale project to take on.

As buildings sit empty, they settle. Small problems grow into structural failings over time if not taken care of.

The city acquired the property, and Lyons and McBride put together a proposal and acquired the building in mid-2020. The building will have a commercial space on the first floor and high-end apartments upstairs.

Phillipson hopes the new life will bring more to the Dowagiac downtown for everyone to enjoy.

“The finished product will provide quality, upscale retail space for another new business, as development of the second level also boosts foot traffic within that block, and the entire downtown,” she said.

In Lyons’ and McBride’s hunt for the perfect place to continue the later years of their professional lives together, they fell back in love with Dowagiac.

As more professionals find they may be able to work remotely — and they leave the larger cities for places with a bit more of a community feel — both Lyons and McBride think Dowagiac is a great place for people to discover.

“We moved here, and we really enjoy it,” Lyons said. “We like being able to be a part of a smaller community where we can have more of an impact.”