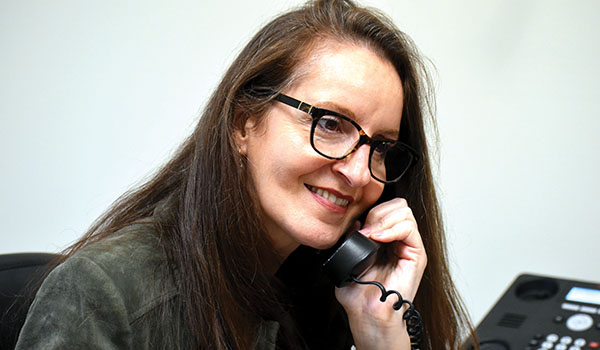 Thursday may be Buchanan resident Karen Pratt’s morning off, but that does not mean she spends that time sleeping in.

She wakes at 6 a.m. and makes herself a cup of coffee — or two — before doing some housework.

Then, at 9 a.m. on the dot, she sits down, often still wrapped in her bathrobe, and pulls out her phone, dialing the same three people she calls each week.

The phone conversations are usually a brief check-in — How are you? How was your week? Is there anything new in your life?

No matter the length of the call, Pratt, 69, said she always hangs up with a smile on her face.

“I really enjoy it,” she said. “Some people don’t chat much; I have to really pull to get them to say anything. Others will just go on and on and on. Either way, I do enjoy it.”

Pratt’s phone calls are more than just catching up with those she considers friends. The calls are a part of volunteer service aimed at providing wellness checks and comfort to area seniors.

Started in 2017, the Buchanan Compassionate Callers Club is run through the Buchanan Area Senior Center. The free program works with volunteers to provide regularly scheduled phone calls to area seniors who may be homebound or have limited mobility.

“When I first started at the senior center, I noticed that there was a group we were not reaching as much, and that was seniors who were less social, who didn’t come into the senior center itself. We wanted to find a way to reach out to them and make sure they were OK,” said Monroe Lemay, BASC board member and former director. “I think reaching out with a phone can help a lot — even if [the senior] doesn’t think so at first.”

The program partners with local law enforcement so that if a senior enrolled in the program is unreachable by the senior center or the person’s emergency contact, the police will check on the senior.

“We wanted to do more than just calling,” Lemay said. “We wanted to have more of a psychological map to know how they are doing, if they are deteriorating and what they need so we could report that to the family if there was something they needed to know.”

Behind the scenes of the program is Joann Dodson, office manager at the BASC. She handles the paperwork involved with keeping the Compassion Callers Club running and steps in if a volunteer needs help, or is concerned about an enrolled senior’s
well-being.

“It’s all working really well at this point,” Dodson said of the program. “We want to keep in touch with seniors. A lot of them live alone or don’t have family around, so we call to touch base. It makes them feel better knowing that someone is checking in on them. I think it’s a great program to have.” 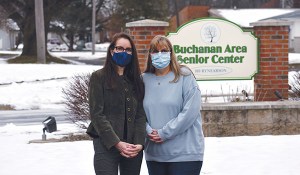 According to those who work in the program, the club’s benefits extend beyond just the seniors it is trying to reach. Volunteers said the program had been a valuable tool for them as well.

Pratt first got involved with the program after seeing the need for volunteers advertised in the senior center’s newsletter. Since then, she has been hooked.

“Thursday is my morning off — I get to do whatever I want, and I wanted to do something,” she said. “I feel like I’m a nurturer, a helper, so the program seemed like a good fit.”

Though Pratt may dedicate her mornings off to volunteering with the program, she said the calls never truly feel like volunteer work.

“I feel like I get more out of it than they do,” Pratt said, letting out a cheery laugh. “It just makes me feel good. Maybe I made somebody’s day. Maybe they didn’t talk to anyone else on that day, and I was able to help them. I’ve never met [the seniors on the other line], but I feel like they are friends, and I care about them. The program is something I can do from my home, and it’s a good thing.”

For fellow volunteer Anne Tews, 46, of Buchanan, the program offered her a lifeline when she needed it most.

When she first started volunteering with the program, she had recently suffered a stroke that left her unable to work. The sudden disruption to her life left her looking for a purpose and a way to spend her time.

“The program helps me in a lot of ways,” Tews said. “I was a work-obsessed fool, which is probably what led me to this. I used to go a thousand miles an hour, and all of the sudden, I was going zero. I’m the kind of person where I just need something to wake up to in the morning. I need something to do.”

The program not only helped provide Tews with a renewed purpose, but it also provided her with a connection with those she called each week.

“It’s something for me to do, and it’s great to provide something these folks need, as well. You give and you get with this program,” Tews said. “You can go through some hard times, like say, the passing of an animal or a spouse moving to a nursing home. You are there for them and are kind of their connection to the world. I think it does a lot of good, and the people are grateful for it.”

Currently, the Compassionate Callers Club serves fewer than 10 area seniors from the greater Buchanan area. With volunteers at the ready and what they believe to be an essential service on their hands, organizers with the club hope to see that number grow.

“We know there are a lot more seniors out there who might not know about the program or understand what it can do for them,” Dodson said. “It would be nice to get the information to them and let them know we are here. We want to get the word out there so that people can know what we are about.”

“I still feel not enough people know about it,” Lemay added. “I would like to see it actually grow where it is not just seniors. Eventually, I would like to see it grow to not just 60 and above, but even lower. I want to see it much larger. … Sometimes, people just need someone to reach out and check on them, and a lot of times, it is easier to talk to a stranger than it is friends or family.”

The ongoing COVID-19 pandemic has exacerbated the problem of isolation in the senior citizen community, and Lemay believes that the Compassionate Callers Club could help many of the seniors whose access to social outlets has been taken away during repeated shutdowns.

“The need has definitely changed. COVID has caused so much isolation, and it’s made it even harder to reach people,” Lemay said. “We know [the club] is needed now more than ever.”

No matter if they feel isolated because of the COVID-19 pandemic or just want someone to call once a week to say “hi,” Lemay said she would encourage any greater Buchanan area seniors — or their families — to sign up for the Compassionate Callers Club.

“We know there is a stigma around asking for help, but we are here for them,” Lemay said. “I don’t think many people realize just how important that connection is — it doesn’t matter who it is with, so long as there is a connection. Even just a phone call helps in ways that people aren’t aware of. We are offering a safe connection to those who need it.”

When the program does grow to include additional seniors, volunteers with the program said they would be ready to answer the call.

“This is something I see myself doing for a long time,” Pratt said, her voice echoing over the telephone line she uses to call seniors each week. “The human conversation is almost like a hug. I guess it’s the next best thing.”

Mascot tradition reborn with the return of SMC’s Ronnie Roadrunner

Southwestern Michigan College’s Zollar Gymnasium was the site of many a basketball game during the early to mid 1990s. Through... read more