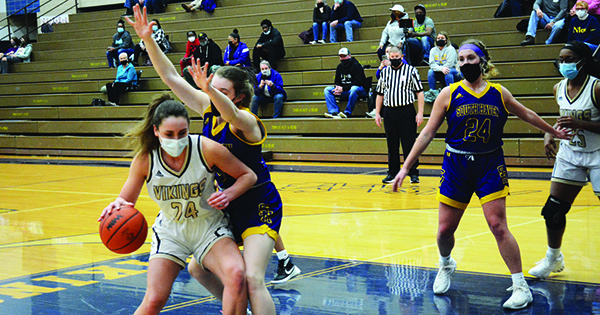 Three players scored in double figures for the Vikings, led by Natalie Lucero’s 12 points. Kamryn Patterson and Alexis Rauch each tallied 11 points while Sydney Skarbek added nine. Up 32-8 at halftime, the Vikings led by as many as 32 points when a Patterson 3-pointer gave Niles a 42-10 advantage late in the third quarter.

“We were focused on playing defense and boxing out,” said Niles coach Jessica Johnson. “We struggle with boxing out, so this game gave us a chance to focus on that.”

Tuesday’s win over the Rams was Niles’ fourth game in five nights, with the Vikings going 2-2 in the stretch, with losses to Buchanan Friday and Mattawan Saturday before rebounding with a 58-48 win over Lakeshore on Monday.

“I’m really proud of the girls for always playing defense and being aggressive,” Johnson said. “I was concerned coming into the game because this is our fourth game in five days. I didn’t know how much legs they were gonna have for the game. I was happy to get a good start so that we could get some subs in.”

The Vikings move to 7-2 (3-1 BCS Red Division) on the season and are currently in second place in the BCS league. Johnson is proud of how her players have stepped up in the absence of junior forward Amara Palmer.

“They’ve come a long way,” she said. “Everyone has stepped up in their own ways. Everybody appears to know their roles on the team and have stepped up in Palmer’s absence. I’ve been really impressed with them, especially after fighting so hard against Buchanan, and then we took a loss to Mattawan. I wasn’t sure how the girls were going to bounce back from that, but they bounced back, and we’re happy about it. There was a lot of energy out there, which helps other girls on the floor. Tonight was definitely a team effort.”