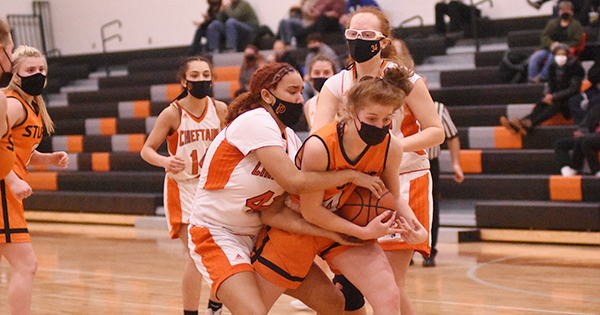 DOWAGIAC — The Niles girls basketball team rebounded from its second loss of the season to beat Lakeshore for the second time in nine days, while Dowagiac and Edwardsburg suffered Wolverine Conference losses Monday night.

The Vikings trailed 13-9 after one quarter, but behind a career-high 31-point effort from Kamryn Patterson, Niles rallied to beat the Lancers 58-48.

Besides Patterson, Niles also got nine points from Natalie Lucero and eight points from Bailey Bickel.

Visiting Sturgis handed Dowagiac a 23-15 loss, which keeps the Chieftains winless this season.

Dowagiac (0-8, 0-5 Wolverine) was shutout in the opening quarter and trailed 14-2 at halftime.

The Chieftains outscored the Trojans 13-9 in the second half, but could not overcome their early deficit.

“That is all I talked to them about at the half and after the game,” said Dowagiac coach Jason Turner about his team’s slow start. “They are not mentally prepared. Our minds are somewhere else to start a game. I told them we beat them in the second half 13-9. Heck, we beat them the last three-quarters of the game. We were down 10-0 and only lost by eight.”

Turner said his team has to come out with more energy and play better defense throughout the game if it wants to pick up a victory. Otherwise, the results will be the same.

“If you come out flat like that, you don‘t play defense, and your mind is elsewhere, you are going to struggle,” he said.

Alanah Smith had five points to lead the Chieftains, who also got three points from Martha Schaller.

Juliette Schroeder, the only player in double figures Monday night, led Sturgis with a game-high 11 points.

Host Three Rivers knocked Edwardsburg out of first place in the Wolverine Conference by beating the Eddies 50-39 Monday night.

Edwardsburg (5-2, 5-1 Wolverine) has a chance to get right back into first place on Wednesday as it hosts league-leading Plainwell. The Trojans are 6-0 overall and in conference play.

The Eddies led the Wildcats in the first half, including 22-17 at halftime, but could not maintain their advantage.

Three Rivers, behind the 23-point effort of Kali Heivilin, who surpassed 1,000 points for her career, outscored Edwardsburg 33-17 in the second half to pull away for the victory.

The Wildcats are tied with the Eddies for second place in the contest. Three Rivers improved to 6-2 overall.

The Bobcats (6-2) doubled up the Comets 14-7 in the opening quarter and then stretched their advantage to 27-10 by halftime. Brandywine led 42-10 after three quarters.

Clara Kimmerly had six points for the Comets.