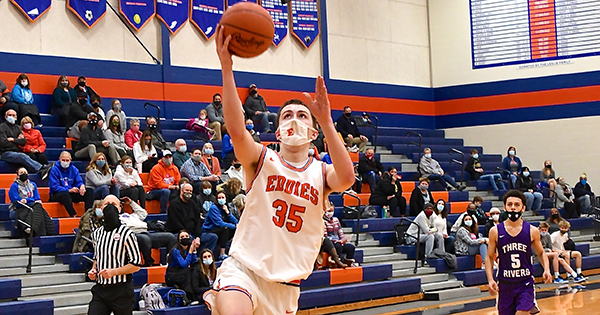 The win kept the Eddies a game behind in the league standings. Edwardsburg improved to 5-1 overall and 5-1 in conference games.

At Sturgis, the losing streak of the Dowagiac Chieftains continued as the Trojans rolled to a 73-48 win behind a 34-point effort by Thomas Kurowski.

In a close game throughout, the Wildcats were able to take a one-point advantage into the final eight minutes of action as they outscored the Eddies 12-8 in the third quarter to turn a 19-16 deficit into a 28-27 advantage.

Brendan Byce scored a game-high 22 points to lead Edwardsburg, which also got eight points from Isaac Merrill and seven points from Luke Stowasser.

Aiden Judsen and Isaiah Moore both finished with 11 points for Three Rivers.

The Chieftain losing streak has reached six games, as Dowagiac could not keep pace with Sturgis in the second quarter.

Leading 17-15 after one quarter, the Trojans exploded for 18 points while holding Dowagiac to 6 points, increasing their lead to 35-21 at halftime.