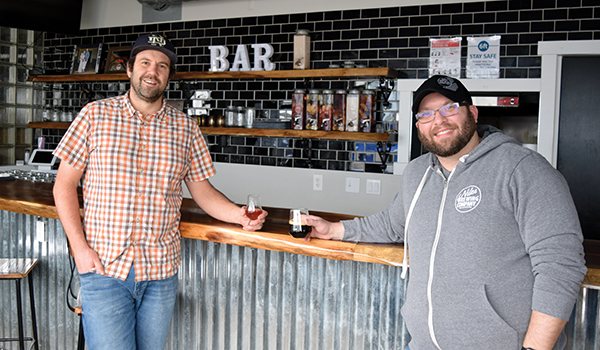 A former muffler shop, the space has transformed into a bustling restaurant where diners can order unique burgers, crispy brussels sprouts and cheese curd baskets paired with cocktails crafted with the distillery’s own vodkas, rums, whiskeys and liqueurs.

Colorfully illustrated bottles invite the eye over to the bar as one enters the restaurant, and garnished drinks invite diners to ask servers to help them locate the drink on the cocktail list.

In March, the bustling bar and restaurant found itself suddenly quiet, as COVID-19 shutdown swept the state.

When the state first mandated restaurants to shutter indoor dining, the Tuthills tried their hand at a number of things to keep their business afloat. First, they closed down completely, pivoting their business toward the production of hand sanitizer. Later, they reworked their model to better suit carry-out needs. Over the summer, they reconfigured their parking lot to allow for additional outdoor seating. However, one of the most successful tactics is one they have used from the first day they opened in 2019 — working with their neighbors.

Centrally located in downtown Niles, the Tuthills had already begun working with other local businesses to support others. Burgers have been known to feature unique flavors of jam from Niles resident Aiye Akhigbe’s “Sticky Spoons Jam LLC” business, for example.

While not being able to offer on-site dining in November and December, Iron Shoe Distilling has continued partnering with other businesses in Niles.

On Saturday mornings, and especially Small Business Saturday, Iron Shoe Distillery allowed Sticky Spoons Jam LLC to set up booth in their parking lot as a way to help Akhigbe continue to sell her jam directly to customers, in lieu of the usual holiday markets she would normally be taking part in.

Around the corner and down the block, Brandon Townsley had been eager to open up his brewery, Niles Brewing Company, for years, and in August he was finally ready.

“I was brewing like a mad man there for a while,” Townsley said of preparing for the brewery’s potential opening after receiving full licensure over the summer.

By the time the brewery was ready to hire a full serving, kitchen and wait staff, the beer was ready.

Then, the Michigan Department of Health and Human Services announced a three-week “Pause to Save Lives” mandate as COVID-19 cases started to explode prior to Thanksgiving. The order was extended days before it was set to expire.

Townsley had become used to delays, with COVID-19 slowing his licensing process down. He had found ways to creatively connect with other local companies to collaborate in their processes while he waited to be able to work independently out of his own brewery.

Townsley collaborated with South Bend Brew Werks in September, over the Indiana state line. Closer to home, he has been working with his friend, Howard Tuthill, for a continuing collaboration and partnership they hope to keep going as Niles Brewing Company begins rolling out its brews in cans in lieu of the brewery’s grand opening.

The rye whiskey was originally planned for a special release in tandem with another beloved Niles event: The Hunter Ice Festival.

“Brandon [Townsley] and I had gotten together and kind of talked through what the collaboration would look like,” Tuthill said. “The idea was always that I would release the whiskey at the same time he opened. As COVID-19 would have it, that kept getting pushed back for him. I went ahead and released [the collaborative whiskey] a couple months before his opening.”

“It’s something about keeping your name out there, without being open,” he said. “It’s very helpful that Howard has been super cool and awesome through the entire process. It’s just building that relationship.”

Tuthill has enjoyed the continued partnership with Townsley.

“The collaboration has brought in beer drinkers to the distillery,” Tuthill said. “Brandon grew up in Niles. He has a good reputation in town. He is well known, and well liked. He has been a huge supporter of ours since the beginning.”

Tuthill said when people were interested in the whiskey that was a collaborative effort with Niles Brewing Company, he was able to let people know how the brewery was moving along toward its grand opening goal.

“It was a way to stoke the fire and get the excitement going for the brewery,” Tuthill said.

When Niles Brewing Company was finally able to release its beers to the public in December 2020, Townsley said the collaborations he had worked on had built up a hype around his product.

As Townsley prepared for opening day, he said he had already been speaking with other business owners in the area to work with and collaborate on beers with.

“We have a few other businesses we are going to collaborate with,” Townsley said. “The goal is to eventually do something with all of the downtown businesses at some point. I’m sure we can come up with something. It’s just going to have to take one step at a time.”

For Iron Shoe Distillery, the staff has continued to look for other businesses in the community to support. In December, the distillery partnered with Niles farm C3 Seeds for its grains.

Even while speaking about their own work, Tuthill said he admires the Niles community for its business and community partners to continue supporting one another through uncertain times.

The year has not been easy on Iron Shoe Distillery, its owners and its staff. Despite this, Tuthill sounded hopeful as he lifted another barrel to keep another batch of whiskey moving along in its distilling process.

“Outside of just businesses we have worked with directly, I know that there are a lot of businesses doing partnership amongst themselves,” Tuthill said. “It’s neat to see everyone working hard to work together and help one another out.”

The tasting room at Hickory Creek Winery is small and intimate. It is an area where visitors to the winery... read more