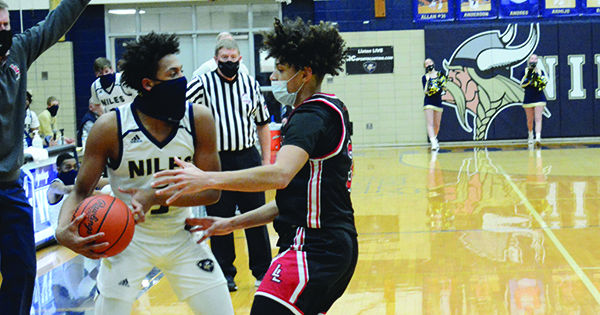 A third-quarter surge lifted the Lancers to a 50-26 win in a matchup between former Southwestern Michigan Athletic Conference foes.

Niles’ ball control kept the team within striking distance in the first half. Trailing 22-11 at halftime, the Vikings were outscored 15-2 in the third quarter as the Lancers seized control of the game.

“We really rebounded well tonight,” said Lakeshore coach Sean Schroeder. “I thought we took a nice step forward offensively. It doesn’t necessarily show in terms of points. Niles was extremely patient today. They shorted the game, and you know that was obviously their strategy, so there weren’t nearly as many possessions as most games. But I thought we were definitely better on offense today, which was good.”

Lakeshore’s defense prevented the Vikings from making plays in the paint and forced them into taking tough jump shots. Niles’ two third-quarter points came with 1:30 to go in the frame.

“The effort was there today,” said Niles coach Patrick Touhy. “Against a team as talented as Lakeshore, all we could do was tell our kids just really want to make sure that we’re always giving our ultimate effort, being physical, and making sure we’re staying competitive. I’m very happy that we were able to hold them to 47 points. That’s a great defensive effort on our part; there’s no doubt about it. We just couldn’t find ways to put the ball into the basket because they’re defense is also extremely intimidating and very good. I wasn’t disappointed with how our kids did in respect to competing.”

Grant Gonndrezick led Lakeshore with 15 points, and TJ Mitchell added nine for the Lancers. Austin Bradley provided a spark off the bench with a team-high 11 points and three 3-pointers.

“This offense that we’re teaching is a very selfless offense,” Touhy said. “We play a widespread, guard-oriented offense with strong, quick ball handers who get to the paint to create an opportunity to put the ball in the hoop. This offense is geared toward a structure, so it’s something that they haven’t been used to. It takes away that athleticism, but the return is wide-open looks. Austin can stroke it, so if we can cross the ball over five times, all of our guards are gonna get good looks.”

Monday’s matchup was Niles’ third game in four days following a Friday game against Buchanan and a Saturday game against Mattawan. The Vikings turn around to host South Haven at 7 p.m. Tuesday.

Touhy believes his team will continue to battle through adversity.

“I know we’ve only won one game, but our kids play with a lot of heart,” he said. “They care about each other. We just want to go on the floor every night and say ‘hey guys, I didn’t want to let you down.’ That’s what we’re trying to teach, and I think they’re being very good about buying into that and doing that for each other. I’ll go home tonight, and I’ll sleep well because I don’t know that we could have done any better tonight.”

DOWAGIAC — There was plenty of action in the Wolverine Conference Monday night as Dowagiac hosted Sturgis in girls basketball... read more