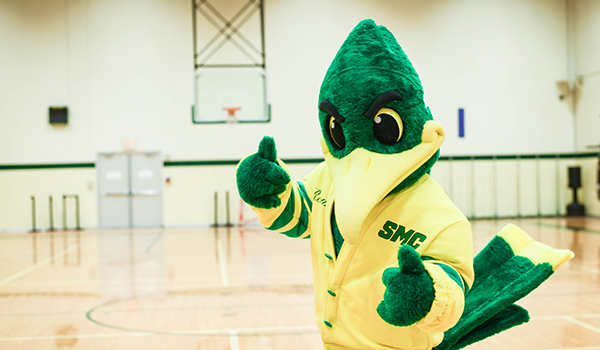 Mascot tradition reborn with the return of SMC’s Ronnie Roadrunner

Southwestern Michigan College’s Zollar Gymnasium was the site of many a basketball game during the early to mid 1990s. Through the highs and lows of the games, there was always one consistent factor — the presence of SMC’s 8-foot tall mascot Ronnie Roadrunner sliding across the court generating cheers from the stands.

Fans packed the gym and bellowed out chants of encouragement for their basketball team squeaking their sneakers up and down the court, the atmosphere ripe for a Roadrunners victory. They could always count on Ronnie to pump up the crowd and to bring smiles and laughs to fans of all ages.

From Niles’ Viktor the Viking to Edwardsburg’s Eddie, area mascots have created the sense of belonging students and community members crave and become recognizable symbols for schools.

Edwardsburg’s burly Eddie mascot owes its existence to a mascot change in the 1940s, when the mascot moniker was changed from the Golden Bears to the Eddies. Niles has been known as the Vikings for decades, but Viktor the Viking was born when the district unveiled its new and improved mascot in 2014.

Dowagiac Union Schools has had a long-standing relationship with the Pokagon Band of Potawatomi Indians, a relationship which culminated in an agreement to create a new logo for the Chieftains in 1990.

The birth of a mascot 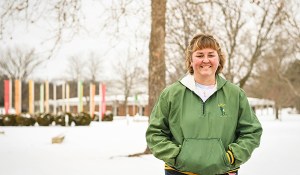 Just a few short years after the Chieftains debuted their new logo, the Roadrunners would bring Ronnie to life in the winter of 1994 as a means to boost school spirit at sporting events and beyond. The school had been using the Roadrunner as its logo on merchandise since 1968, but had not yet made the jump to issuing a mascot costume.

A roadrunner was deemed the perfect fit for a school with a cross country program like SMC, which had earned multiple national championships under then-head coach Ron Gunn.

“It was a very popular car,” Gunn recalled. “I’m glad it is what it is. I had something like the Warhawks in mind. When we started the cross country program, the mascot was ideal in terms of what we were all about. It became famous along with our program. Everyone thinks I came up with it, but they gave me credit I didn’t deserve.”

The dark brown outfit with yellow tights, a yellow beak with a green comb atop its head was a head turner wherever it went.

“Everybody loved the mascot and our team’s success,” Gunn said. “The attention it brought to the school was impressive. It has evolved over the years because of our success in cross country and track teams. The other programs embraced it and came up with their own. It was a staple at community events and instilled a sense of pride in SMC students and the community.”

According to school officials, the name Ronnie was chosen because it’s not gender-specific so that both men and women could take up the mantle. The first student to don the costume, Kim Robison, enrolled at SMC in the fall of 1994 after graduating from Dowagiac Union High School.

“I decided to attend SMC to stay close to home and to find out what I wanted to be when I grew up,” she said.

Attending SMC became a family tradition of sorts. Both her parents and her daughter attended the community college.

Gloria Cooper, the school’s director of public information at the time Robison was enrolled at SMC, approached Robison about becoming the school’s mascot.

“I decided to give it a try,” Robison said. “I was 19 at the time and was nervous. The costume looked more like a chicken than a roadrunner. I looked like Foghorn Leghorn.”

One of her most notable appearances as Ronnie came during the South Bend White Sox baseball team’s SMC Day at Stanley Coveleski Regional Stadium in July 1995. She signed autographs and ran bases with mascot Covey in front of more than 1,000 fans.

“I got to run the bases with him,” Robison said. “It was extremely hot that day, and I got back up to the concourse and I passed out and my head fell off. A little girl screamed ‘chicken dead, chicken dead!’”

Robison was a regular college student by day and Ronnie Roadrunner by scheduled appearance. Being a local celebrity of sorts was a change of pace for her.

“It was surreal,” she said. “Back then, no one knew who I was. Kids would be yanking my tails, and I would be shaking hands. I was pretty shy so the experience really helped me break out of my shell. I enjoyed it; it was something I never expected to do.”

More than two decades after strutting through SMC campus as Ronnie Roadrunner, Robison returned in 2020 to study health information technology after receiving a Futures for Frontliners scholarship.

“I was an insurance specialist at Great Lakes Eye Care in St. Joseph for five years,” Robison said. “While there, I became interested in the HIT programs at SMC and thought I would like to know more. The classes are at night, so I can go to work during the day and go to classes at night.”

Attending classes on campus again was a surreal experience for Robison, even more so when the school announced the return of collegiate athletics — and with it, a new and improved Ronnie Roadrunner. 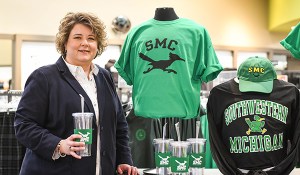 In conjunction with SMC rejoining the National Junior College Athletic Association and the return of its cross country program, the school unveiled Ronnie’s updated design in November.

“We’ve always had Ronnie,” said SMC Marketing Manager Michelle Orlaske. “The previous logo was getting dated and needed a refresh. With the start of athletics, we went back to feedback, and we knew we wanted to change some things.”

Orlaske and Vice President Mike O’Brien collaborated with Brian Berkins, of DDM Marketing and Communications in Grand Rapids, to create two designs for Ronnie — a traditional design primarily for athletics and a more animated design to be used for club sports and student activities.

According to Orlaske, the designs went through five revisions and received feedback from both SMC employees and students.

“We wanted somebody who was a great hand-drawn illustrator,” she said. “The designer was able to give Ronnie three dimensional features. That’s what we were really looking for.”

Gunn is a fan of Ronnie’s new design.

“The older one was great but it was more of a cartoon character,” Gunn said. “This one feels more modern and competitive.”

Merchandise featuring the new Ronnie is available at the on-campus bookstore. Seeing a revamped Ronnie years after wearing the original costume was surreal for Robison.

“I went to the bookstore to see the mascot apparel,” Robison said. “There were students in line with me asking who I was. I told them that I was the first mascot. They couldn’t believe it.”

SMC Executive Director of Campus Life Jeff Hooks hopes that the new and improved Ronnie Roadrunner will serve to boost school spirit throughout the SMC campus.

“I’m pretty excited about it,” he said. “Mascots are a great visual representation of school spirit. I’m glad we’ll be using it more so we can build campus traditions. I’m looking forward to seeing more merchandise. That will be nice.”

While its debut has not been set in stone, Orlaske expects the Ronnie Roadrunner mascot to make one of its first appearances at SMC’s first home cross country meet next year.

“It’s going to be a good addition,” she said. “We hope to have Ronnie present when we have big events at the college post-COVID. We’d really like to get Ronnie out into the community. It’s great that we will be able to bring Ronnie out to the community to show the college’s school spirit and help him get involved.”

SMC has yet to decide on who will be its next mascot. As a current student, will Robison come out of retirement and don the mascot that was such a large part of her life several decades earlier?

“I don’t know about that. Let me think about it,” Robison said, jokingly.

Even if she has hung up the costume for good, Robison treasures her time portraying the beloved character fondly.

“It was the joy and the smiles on their faces,” she said. “Being able to give people that joy every day, I enjoyed it thoroughly. That costume got me through lots of heartbreaks. I took great pride to make sure I was part of the local sporting events and the Dowagiac community. Once you’re a mascot, you become a part of something bigger than yourself. Whenever I put it on, I tried to bring a little piece of happiness to somebody. Whoever gets it has big shoes to fill.”

Amid pandemic, community responds to increased need with increased generosity